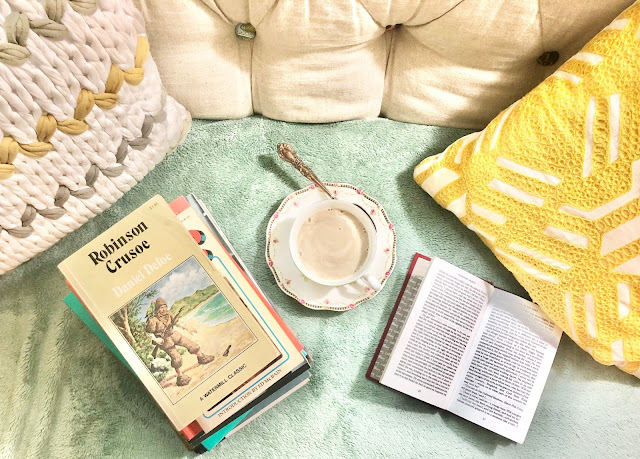 Author: Daniel Defoe
Date Published: 1719 in the U.K.
Media used: Audiobook, 11 hours
Written as if Robinson Crusoe is the author, it is a fictionalized autobiographical travelogue of his various expeditions and adventures, culminating to his twenty-eight years as a castaway on a remote island. Here he teaches himself how to survive on meager food options, creates a compound  for long-term habitation, and commits his life to God after realizing how far he strayed from the faith of his childhood. On the island, which is thought to be near Venezuela, after more than two decades of seclusion, he eventually encounters cannibals, captives, and mutineers, aiding in the rescue of a captain who eventually helps him sail back to civilization.
Revered as the first English novel, it is one of the most published books in history. It is also a commonly imitated book, with various tropes in literature, television, and cinema that are reminiscent of of Robinson Crusoe's story of survival. There is actually a term called Robinsonade that denotes survivalist fiction. The first similar novels that come to mind are two books I read this year: Gulliver's Travels (published in 1726) and The Swiss Family Robinson (1812). In television, Gilligan's Island was a comedy in the 1960s about a sailing group that got stranded on an island. More recently, Lost (2004-2010) and the reality show, Survivor (2000-present), can also fit this category.  In film, of course there is Tom Hank's brilliant portrayal in Cast Away as a FedEx employee who is stranded on an island after a plane crash with only a volleyball he aptly names Wilson to hear his meandering conversation. Even The Martian can fit in this category, though his 'island' is a planet. The influence of Robinson Crusoe is obviously as vast as the island he spent decades exploring.
Robinson Crusoe was written during the Enlightenment  period of the 18th century by a Puritan author. Crusoe's initial reticence to follow in his father's footsteps (both in career as a merchant and in religion as a Christian) clearly portray his independence from the status quo and tradition in exchange for an adventurous journey based on his own knowledge and reason. He eventually is convicted of his disobedience to his father and his denial of God in his life after living in seclusion on the island. He repents and becomes a Christian, though he often would forget a lot about God's provision, providence, and goodness when he'd encounter hardships (but doesn't every Christian struggle with this too, at some point?). His reflections on his faith and trust in God's providence despite the uncertainty of his future were really fascinating and a surprise for me since I did not expect there to be a spiritual autobiography side-plot:
The book definitely has its share of controversy. The reason that Robinson Crusoe was on a ship near South America before being shipwrecked, is that he was sailing to retrieve slaves from Africa after becoming a successful plantation owner in Brazil. This was uncomfortable to read about even though this was common during that time period. Likewise, as more humans inhabit the island (including the native cannibals who were there before he landed on the island), he exhibits what novelist James Joyce critiques as a mentality of the British Empire colonist because of his "manly independence, unconscious cruelty, slow yet efficient intelligence..." The portrayal of his servant, who he saves from cannibalism, converts to Christianity, and names Friday (since that is the day he rescued him), is seen as a savage while Crusoe refers to himself as master and king of the island several times, representing the "enlightened" European and further pointing towards racism and classism that was common in that era. Also, it was appalling that after returning to his wealth and civilization, Crusoe sent a ship full of women to be married to the men who remained on the island. Did these women have any say in the matter? It really wasn't mentioned and that was concerning. While many scholars have deconstructed the novel to be an allegory of economic individualism and European colonialism, others have focused on the religious formation and Enlightenment era influence, it can also just be enjoyed as a survivalist novel too, which is how I mainly read it. But I did have to stop and think about some of the things that made my uncomfortable. For instance, a prideful, colonialist mentality is clearly displayed here:
I  enjoyed Defoe's creative (and at that time, innovative) writing style where the main character was the author of the book, rather than Defoe himself. But I struggled through the first half of the novel, feeling like I have read this before since I had recently read The Swiss Family Robinson and Gulliver's Travels. I realized I was getting burnt out on the shipwrecked survivalist trope. During the first few chapters of Crusoe's isolation on the island, the novel read like a dull travel journal with the most important statistics noted rather than a captivating narrative.  I have trouble staying engaged when a novel is just about details like how Crusoe fed, clothed, and sheltered himself. This was a similar complaint I had with Swiss Family Robinson at first. The facts-laden  travelogue  style seemed to drag on until Robinson had his spiritual reformation experience and became a Christian. This part included more reflection on his past life and emotions than a long list of things he did during any given day. Once he discovered other humans on the island, this further interested me since that meant there would be dialogue. The novel slowly grew on me and I ended up enjoying it overall, though it definitely had its faults.
My Rating
★★★☆☆
Content Rating
PG (no language, sexual content, mild violence)