None Like Him // A new study on attributes of God 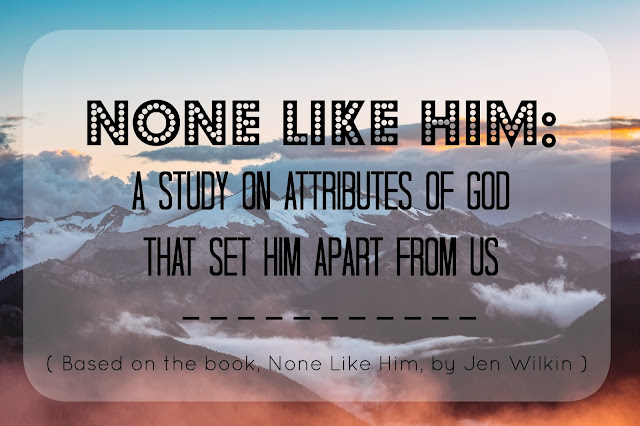 I am currently reading Jen Wilkin's book, None Like Him: 10 Ways God Is Different Than Us (And Why That's A Good Thing). I'm on the third chapter so far and already learning so much.  Studying the attributes/character of God is such a powerful way to know and trust God more fully, so I am excited to grow in my knowledge and awe of who He is.  I wanted to share some of the pearls of wisdom Jen Wilkin imparts in the book -- as well as some of my own thoughts.

Wilkin briefly mentions attributes of God that we can emulate. God is loving, just, good, merciful, gracious, long-suffering, wise, faithful, truthful --- and we can be too! We can reflect God's image and character through these attributes even though we can never be perfect in these attributes like He is. I don't think we will ever get in trouble for trying to practice more and more of these aforementioned attributes. We can always strive to love more, forgive more, show mercy and forgiveness more, pursue wisdom more. We can image Him in these things although only God is perfect and limitless in these shared attributes.

We cannot be these things; when we try, we end up rivaling God rather than reflecting Him because we are not capable or called to be these things. Rather than reflecting His glory like we were designed at the beginning of time in Imago Deo (Genesis 1:27), we end up competing for it -- often with disastrous results. If you think of humans who tried to be omnipotent (all-powerful), evil dictators come to mind. If you think of humans who've tried to be self-existent or self-sufficient, stingy misers or mentally-unstable people living in isolated cabins in the wilderness might come to mind. A parent who tries to be omnipresent is referred to as a 'helicopter parent' and often-times will push their kids away because of it. What I am trying to say is that whenever we try to emulate any of these ten specific characteristics of God, we fail -- and we fail hard. Only God can completely and fully encompass these ten specific attributes without being a tyrant. Only He can encompass these ten specific attributes and be worthy of our trust and praise.

We see an example of humanity's desire to rival God in the first pages of the Bible in Genesis 3:4-5. Eve was tricked by the serpent to eat the forbidden fruit from the only tree in the garden which God commanded her and Adam not to eat. We can toss the blame on the serpent -- and he certainly deserves a lot of blame -- but we would certainly be amiss to not call out Eve for her sin. She listened to the serpent's tempting reasoning that eating the fruit would give her knowledge so she can be like God. Her decision to bite from the fruit (and offer some to her husband) revealed her heart's desire in that moment to be like God in a way that rivals His authority since He had previously set limits on eating that specific fruit she was reaching for. Thousands of years later, we are still reaching for the fruit. We are still finding ways to rival against God and try to do things our own way.

Wilkin wisely sums it up how we are called to reflect  and not rival God:


"Rather than being like God in His unlimited divinity, we are to be like God in our limited humanity. We are capable of bearing His image as we are intended only when we embrace our limits. Image-bearing means becoming fully human, not becoming divine. It means reflecting as a limited being the perfections of a limitless God . . . When I reach the limit of my strength, I worship the One whose strength never flags. When I reach the limit of reason, I worship the One whose reason is behind searching out." (p. 25)

When we have a clearer grasp of who God is, we can trust Him more deeply. When we rest in His perfection and understand that we are not called to perfection here on earth, we can start to let go of perfectionism as well as holding others (spouse, pastor, parents, etc) on a pedestal that they can never live up to (this is something I struggle with). We can never know Him fully because He is just too immeasurable and big for our finite minds to wrap around. But, He has still revealed enough of Himself in nature and in the Bible for us to be able to worship and trust Him.

In my own life, the seasons in which I focused on better understanding the attributes of God were the times that I felt most secure in who He was, and consequently, who I was. When I was specifically searching and meditating on Bible verses that explained attributes of God, I could lean on the truth of who He is rather than on the anxieties in my heart that led me to doubt and fear. Standing on the firm foundation of who God is has brought deep healing in my life in the past several years. Now, as I am in this new season of life (newlywed, recently moved cross-country, new job, etc), new anxieties threaten to shake my heart. But I am trusting that studying God's attributes will once again refocus my heart away from the fears and instead on the God who is far, far, far above anyone and anything. I look forward to hearing thoughts from anyone else who has studied these specific attributes that Jen Wilkin focuses on (either through your own study or if you've read this book).

Later this week, I will post on the first attribute she discusses in her book: God is infinite.

Interested in buying the book? This is an affiliate link, meaning that if you purchase the book using this link, I receive a very small compensation with no extra cost to you.