The Classics Club: Far From the Madding Crowd 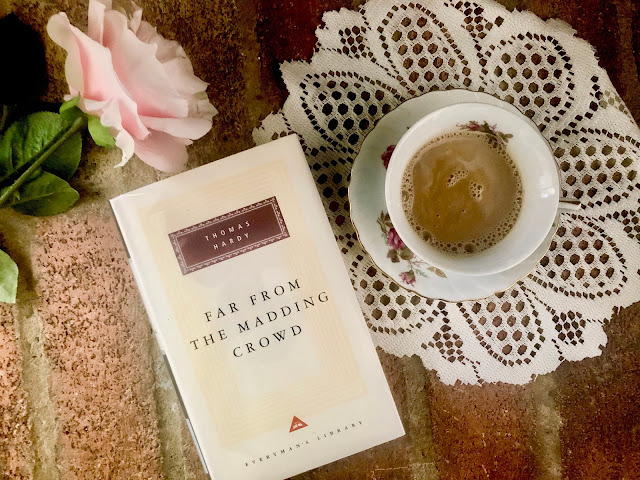 The first and arguably the most loved of his novels, Far From the Madding Crowd, is set in the imaginary pastoral country in southwestern England called Wessex, which was the setting for several of Hardy's novels. The title of the novel is borrowed from a line in the an English poem called "Elegy Written in a Country Church Yard" by Thomas Gray in 1750, which was about a man looking at tombstones in a cemetery, pondering on the farmers who once lived in that village (some rich, some poor). The idea that death is the great equalizer (we all die eventually and cannot take our wealth or fame with us) and that our aim in life is often getting the best that life offers, are themes of the poem. "Madding" means frenzied, and that is what Hardy and Gray both felt was what a life distracted by the frivolities of life looks like. A frenzied life, which is a direct contrast to the quiet, restful pastoral landscape of the English countryside, the setting of both the poem and the novel. When the exciting and shiny parts of life are pursued, it often means that the truly good things of life, like good character and hard work are ignored or at least not prioritized. This is the main theme of the novel.

In short, it is about a love square, which I don't think is an actual term, but fits better than a ‘love triangle’ in this instance: A woman is courted by three different men, all of whom are extremely different from one another. Since the plot is heavily focused on these four characters, I will dive into each of them to give a better understanding of their appeal (or lack thereof).

Let's start with Bathsheba Everdene. She is beautiful, fiercely independent, well-educated, headstrong, a shrewd and capable employer who quickly comes to speed in all manners of running a farm when she inherits the family business when her uncle dies. She impressively runs a thriving business in a time when only men ran farms. However, she has some major character flaws that get her into a heap of trouble and lead to folly, namely her vanity, pride, impulsivity, and unwillingness to listen to correction.  I have to admit, she was unlikable to me until nearly the end of the novel because these latter character traits led her to be rude and she thought herself far above others, particularly towards my favorite character, Farmer Oak. Here is a quote from her introduction to her farm-hands after inheriting the farm that showed her strength and desire to be a well-respected employer:

"Now mind, you have a mistress instead of a master. I don’t yet know my powers or my talents in farming; but I shall do my best, and if you serve me well, so shall I serve you.I shall be up before you are awake; I shall be afield before you are up; and I shall have breakfasted before you are afield. In short, I shall astonish you all."

Gabriel Oak is a rugged farmer who lost his flock of sheep after an unfortunate event that was not his fault and is eventually employed by Bathsheba when she is suddenly thrust into an employer role. They'd met several months before his losing his sheep  and he was smitten with her, proposing after hardly meeting her, to which she declined because he was a poor farmer. He respected her decision and though a slightly awkward employee-employer dynamic at first, he proved to be the most hard-working, consistent, loyal, dependable, diligent, and wise of her farm-hands. He was not handsome or rich, which placed him on a lower rung in the social ladder, but he was like a diamond in the rough: He proved to be a good man with noble character traits and often thought of the wellbeing of Bathsheba and others before thinking of himself. I find it fitting that his last name is Oak since these trees symbolize moral and physical strength and knowledge. He personified the title of the novel since he was not distracted by frivolities and frenzied pursuits,  but steady in character amidst the other characters that were ruled by their frenetic passions.

“What a way Oak had, she thought, of enduring things. Boldwood, who seemed so much deeper and higher and stronger in feeling than Gabriel, had not yet learnt, any more than she herself, the simple lesson which Oak showed a mastery of by every turn and look he gave—that among the multitude of interests by which he was surrounded, those which affected his personal well-being were not the most absorbing and important in his eyes. Oak meditatively looked upon the horizon of circumstances without any special regard to his own standpoint in the midst. That was how she would wish to be”

Farmer Boldwood lives near Bathsheba and is a dignified  and wealthy farmer. He’s oblivious of females and is bit of a social recluse until Bathsheba flirtatiously sends him a valentine with a stamp that says Marry Me as a practical joke. Well, joke's on her because he becomes obsessed with her, proposing numerous times, practically begging and guilt-tripping her into considering his proposal. On the surface he appears intelligent and mature since he’s the oldest of her suitors, but he is controlled by his emotions, which means he’s part of the madding crowd, with an emphasis on ‘mad’. Marriage to him would guarantee financial security for Bathsheba, though she doubts she can ever fall in love with this man, who is more than a decade older than her and is a bore compared to her spirited self. But she considers it until she literally falls head over heels (and trips over) a dashing soldier ...

Sergeant Troy is the opposite of Gabriel Oak: he’s all shiny on the outside with his good looks, flattering compliments (which definitely stroked Bathsheba's ego and vanity), and he led an exciting life, while inside he was a pompous jerk and proves to be negligent and lazy and a bit of a gambler. He reminds me of Wickham in Pride and Prejudice  and Willoughby in Sense and Sensibility. He knows how to get a lady’s attention, but he’s no true gentleman. Throughout his interactions with Bathsheba, I wanted to cry out, "Stay away from him! He's bad news!"

“Troy's deformities lay deep down from a woman's vision, whilst his embellishments were upon the very surface; thus contrasting with homely Oak, whose defects were patent to the blindest, and whose virtues were as metals in a mine.”

I enjoyed the book overall, though it was tough at first because I wasn’t a fan of Bathsheba for at least half the novel because of her recklessness, but I became a fan eventually and appreciated that she was an imperfect character, which made her believable (though still aggravating!). The writing was harder to get through than other classics I’ve read; Hardy’s descriptions had pastoral terms I wasn’t familiar with and there were long, wordy descriptions that were hard to follow at the beginning of the book. But I eventually found my groove once the action started happening, and then I was hooked, appreciating the atmospheric language of the fictional Wessex countryside. The novel had a slightly melancholy tone to it at times, but from what I’ve heard, this is a much more cheery tone compared to other Hardy novels. The countryside setting sounded dreamy, though a ton of work (which, admiringly, Bathsheba definitely isn’t afraid to get her hands dirty and get work done herself). There was more action and suspense than I expected, which was well-paced and creatively executed.   I absolutely loved the 2015 film adaptation starring Carey Mulligan and felt the heart of the story was retained though they simplified a few subplots.