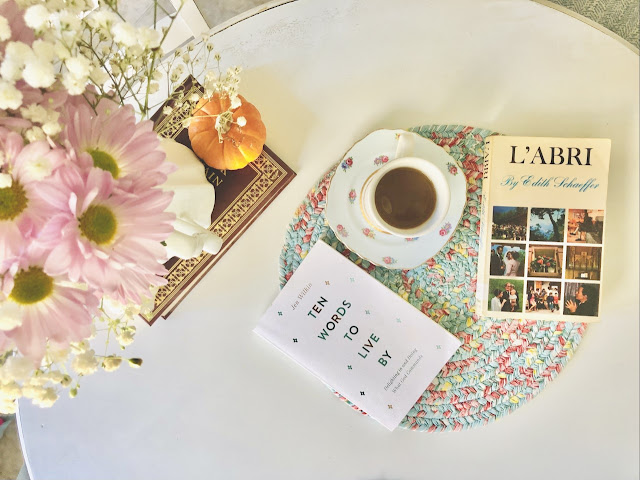 A WWII novel focused on four women who enter a competition to be on a wartime cooking radio program called The Kitchen Front. Their lives are intertwined and new friendships form as they encounter hardships. I enjoyed this book a lot, especially since each of the characters (even the one I initially disliked) were redeemable and their character development was well-drawn out. It was a different sort of WWII novel since it doesn't focus on the war as much as the women in England who were surviving during tight food rations, air raid threats, and grieving their beloved men fighting in the war.
Rating: PG (short, not-too-descriptive sex scene)
Ginny Moon by Benjamin Ludwig (audiobook) ★★★★☆

Told from the fascinating perspective of Ginny, a fourteen-year old girl with autism, who is an unreliable narrator since she trying to make sense of a very confusing world and often misunderstands a lot of what's going on around her. Her neglectful and abusive mom has lost custody of her, so she has bounced around foster care home until landing with a forever family who care about her. But that is all in jeopardy when she starts making incredibly dangerous decisions in search for her "baby doll" that she believes is still with her mom. I thought this was a middle-grade novel, but it definitely is not; I would say it's for adults only because of the language (her mom cusses a lot). I felt like the author developed a character that wasn't stereotypical of a person with autism, but instead, showed characteristics of autism while also showcasing a full array of other characteristics, including her grit, stubbornness, loyalty, and persevering spirit. There were a lot of twists and turns, and some intense scenes, so it was somewhat of a thriller. I was frustrated with Ginny because she was being so unsafe, but at the same time understood that she was so focused on her end goal that it was easy for her -- being both a teenager and having autism -- to be a concrete thinker and be oblivious of possible harm.
Rating: PG-13 (language)
Ten Words to Live By: Delighting in and Doing What God Commands by Jen Wilkins ★★★★☆

It's far too common to hear the phrase "Christianity isn't about following rules, it's about relationship," and easy for some to disregard the Ten Commandments as archaic and unnecessary for Christians. Jen Wilkins pushes back at this and explains how the Ten Commandments are still applicable and vital for Christians today who seek to love God and love people. She brings up things that I never thought about with each of the commandments and she had thought-provoking discussion/journaling questions at the end of each chapter. There were a few of the commandments I wish she explored a little more, but overall I was challenged by this book to evaluate different parts of my obedience to what God calls for His children.
Rating: G
Lessons from Madame Chic: 20 Stylish Secrets I Learned While Living in Paris by Jennifer L. Scott (audiobook) ★★★★☆ 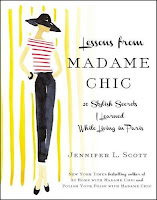 I've read a few of Scott's books on etiquette and overall being "chic" and really enjoy her YouTube channel in which she is pretty active. This is her first book, which chronicles her time in Paris with two different families as an exchange student many years earlier, one of whom she refers to as Madame Chic because she embodies the quintessential chic Parisian woman that Scott was inspired to emulate and write about. As a casual Californian young adult, she was inspired and challenged by the way that the women from the two French homes led their lives, from their beautiful wardrobe and makeup to their pristine house, elaborate meals, frequent dinner parties, and disregard for materialistic obsessions. As she returned to the States and started her own family years later, she started implementing some of the "secrets" she learned and turned this passion into a collection of books, blog, and YouTube channel. There was a good amount of material I enjoyed and implemented both this time around as well as with another of her books, At Home with Madame Chic, such as capsule wardrobe (or at least, my version of it), organizing my closet, putting more effort into hairstyles instead of the same low ponytail I've been rocking since Elliot was born, and others. That said, some of the tips were unrealistic for my life (getting routine facials and mani/pedi, for example), so I just ignored whatever wasn't feasible or interesting to me. I feel like she comes off a bit judgmental of any woman wearing sweatpants or who frequently orders take-out rather than cooking multi-course meals or who hire a housecleaner instead of loving housecleaning every week, so I was a bit annoyed in some parts I didn't agree with and even felt a bit offended a few times. BUT, seeing her on her YouTube channel (versus hearing an audiobook narrator who is not her) made me connect with her more and see her in a much better light.
Rating: G
When Strivings Cease: Replacing the Gospel of Self-Improvement with the Gospel of Life-Transforming Grace by Ruth Chou Simons (audiobook) ★★★★★ 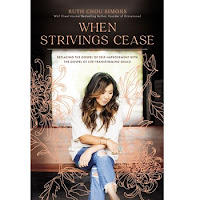 Ruth is an talented artist (mostly floral and landscape watercolor paintings with Bible verses in elegant calligraphy) and author (of devotionals and a Bible study) who I have been following on Instagram for years.  Even her posts are well-written, thought-provoking, and always pointing followers to God. She digs deep in this book, which is part memoir and part theological exploration of grace. As a young Taiwanese immigrant stuck between two cultures in America, she found her self constantly trying to prove her worth as a young girl and later as a young adult. In Part One, she shares how her quest for self-improvement, perfectionism, avoiding the shame that constantly plagued her, and constant striving in her own strength only left her feeling defeated and exhausted. She explores why these attempts are impossible and even harmful for any Christian woman. Part Two is all about God's grace and how it is the anecdote to striving in and of ourselves, and how it propels us to a different type of striving IN grace rather than FOR grace. Her Biblical insights are solid and grounded in Scripture, and helps unearth unhealthy thought patterns and self-improvement habits that Christian women can easily fall into when they don't fully grasp the whole gospel and power of God's amazing grace. This was an excellent read on audiobook, but I definitely will need to buy it so I can underline and highlight the mess out of it.
Rating: G
Gaudy Night by Dorothy Sayers (audiobook) ★★★☆☆

I have heard Sayers touted as one of the best British mystery authors, a title I had assumed belonged to the Queen of Mystery, Agatha Christie. So, I was curious and wanted to give one of her most popular mystery novels a chance. I enjoyed the setting (Oxford) and the mystery itself was good (I didn't guess the perpetrator, though I am always bad at this stuff), but it was SOOOO LOOONG. I just didn't enjoy the drawn-out philosophical  conversations between all the intellectuals, nor the somewhat pompous attitude of private investigator Lord Peter Wimsey. I just couldn't really connect with anyone and didn't really care what happened to them. By the time I figured out that I didn't enjoy it, I read too much of it and felt like it would have been a waste to quit, which wasn't very logical since I wasted more hours listening to the audiobook to finish it, but at least the ending was somewhat interesting with the twists and ending. I will stick to Agatha Christie if I want any more mystery in my life.
Rating: G
'Classics Club' Reading Challenge:  - 30th book (out of 75). See my whole list HERE
L'Abri by Edith Schaeffer ★★★★★

In 1955, Frances and Edith Schaeffer, along with their four children, moved into a chalet in the mountains of the Swiss Alps. The idyllic setting became a hub of intellectuals, back-packers, soldiers, atheists, agnostics, and others who were seeking some reason for life. Frances led lively discussions about Christianity while Edith fed and found shelter for those visiting their home, which often meant their house was bursting at the seams. Over the next decades, their home and extending community, L'Abri (French for "shelter") lived up to its name, as many came for respite, equipping, and understanding Christianity in a life-altering way. Edith shares dozens of stories of people whose lives were radically changed while at L'Abri, but she never does it with pride or an air of self-achievement, but rather, turns all the glory to God. I loved her writing style, which was casual as if writing a letter to a friend, but also full of depth, such as she explains some of their core beliefs and ways they explained the Bible from a birds-eye-view to see Christ and the gospel permeating through all of Scripture. I was inspired and challenged by her ability (though she admits it was often difficult) to always have her doors open to strangers for the sake of sharing the gospel with them. Their ministry was not an easy one, with financial worries and difficult decisions (as well as two chronically sick children to care for), and yet she constantly persevered because she knew she was doing it in God's strength and that this was what He wanted for their family. I loved Edith's other book, The Hidden Art of Homemaking, which now I want to re-read since I understand more of the context in which she wrote that book. I also love her daughter Susan's book on the Charlotte Mason method of home education, For the Children's Sake, so I will definitely be reading more from the Schaeffers soon.
Rating: G
'Classics Club' Reading Challenge:  - 31st book (out of 75). See my whole list HERE
The First Emma by Camille Di Maio (audiobook) ★★★★☆

During an era when women weren't involved in business, Emma Koehler was a powerhouse of a woman whose business savviness and leadership in the business of brewing was exponentially increased the three decades after the murder of her husband, Otto, by one of his mistresses (also named Emma). A passionate businessman, Otto dabbled not only in beer, but also in mining, and a resort, making him and Emma one of the wealthiest coupes in Texas. In this novel loosely based on real events surrounding Emma Koehler, the namesake of Hotel Emma in San Antonio (revamped from the Pearl Brewery she managed), readers are introduced to strong, capable, industrious, and generous woman. A dual timeline, one of which is set in the 1940s during WWII as an aging Emma is dictating her story to a young woman named Mable, helps to move the story along, with real news clips of the murder trial of Otto Koehler introducing each chapter. I enjoy historical fiction and this was special since it is set in the city I live in.
Rating:  PG (very quick sensual scene without lots of details)