The Classics Club: The Scarlet Pimpernel 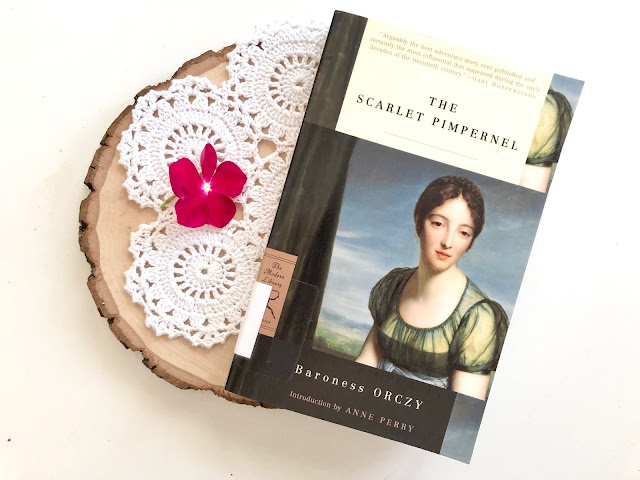 This month, I joined the Classics Club, a community of bloggers who are committed to reading at least fifty classics in five years. I chose fifty-five classics since I am terrible at narrowing choices down, plus I am a pretty quick reader with the help of the 2X speed on audiobooks. See my list of fifty-five books HERE. My first book read for the challenge was a classic I have had on my To-Read list for at least two or three years.

I review the books I read in a monthly post, but for this challenge, I will write individual reviews for the fifty-five books and they will be a bit more extensive than my blurbs on my monthly reading round-up.

Baroness Emma Magdolna Rozália Mária Jozefa Borbála "Emmuska" Orczy de Orci was a Hungarian-born British  author and playwright who was born in 1865 and died in 1947. She started writing early in her marriage when money was tight. In 1903, she and her husband wrote a script for a play and accompanying novel that would soon be known as The Scarlet Pimpernel (though the novel wouldn't be published for another two years). The play became a huge hit in London's West End before being published as a novel, and in the proceeding years, she wrote a dozen novels in the series.


Plot
Between 1793-1794, right after the start of the French Revolution, there was a period called the Reign of Terror, when rich aristocrats and politicians were accused of treason and massacred publicly at the guillotine. This is the grim time period we step into when we begin this historical novel. There is a mysterious, quick-witted, and brave British hero nicknamed The Scarlet Pimpernel who is finding creative ways to help innocent, targeted aristocrats escape to England. His "calling card" or signature is the illustration of a scarlet pimpernel,  a star-shaped flower. He is hunted down by French revolutionaries who want to uncover his identity, one of which is a sneaky weasel named Chauvelin. Meanwhile, there is a young and beautiful French woman named Marguerite who is newly married to the dull yet fashion-conscious Sir Percy Blakeney and now lives in England. When Chauvelin finds her and convinces her to find a way to uncover the identity of The Scarlet Pimpernel in order to save her brother's life (who has been helping out The Scarlet Pimpernel), she is caught in a difficult decision. But when she uncovers the identity of the elusive Scarlet Pimpernel, things get really interesting, to say the least. Can this hero find his way out of the clutches of French revolutionaries who want him dead?

My Thoughts
I enjoyed this story about the cunning wits of the elusive Scarlet Pimpernel and the creative ways he helps save innocent rich French men, women, and children from their deadly fate at the guillotine. I do not want to spoil his identity, but I thought Orczy was brilliant with the drama leading up to the big reveal. There was a lot of suspense and fast-paced action that was entertaining. This is not my typical genre of fiction since I tend to enjoy slower books about women or old people (haha), but I can see why this novel is revered as a classic.

Many of the creative devices of The Scarlet Pimpernel have inspired modern heroes. The notion of a secret identity  is commonly used by superheroes such as Batman and Spiderman. The use of a symbol is also common, such as Batman's bat logo emblazoned in the sky. The Scarlet Pimpernel's ability to outwit his enemies is also a quintessential of a modern superhero, not to mention having a network of supporters called The League of the Scarlet Pimpernel that is similar to the more contemporary Justice League. It is pretty fascinating how a classic can have so much influence in the world of comics and novels about superheroes.

Stats
This is #1 of 55 books in The Classics Club challenge.