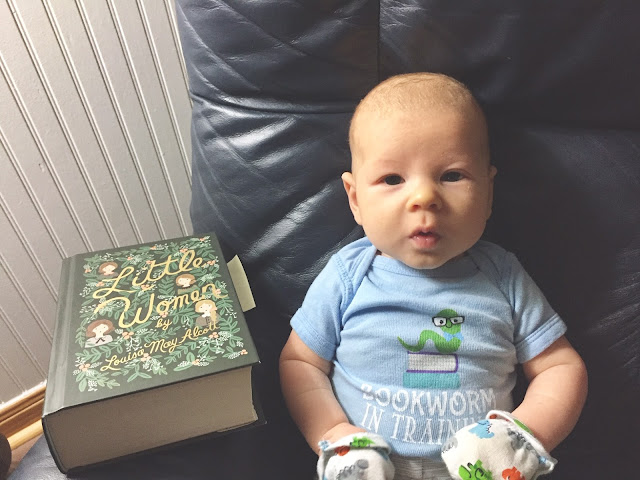 As mentioned in previous months, my reading life now consists almost entirely of e-books and audiobooks I can read while nursing my bookworm in training, Baby E. This is the only way I can get any reading done these days so I will take it!


House of Dreams: The Life of L.M Montgomery by Liz Rosenberg (e-book)★★★★☆

A well-written biography of the prolific author of the beloved Anne of Green Gables series among many other female-led novels. Though there were plenty of similarities between Lucy Maud and her literary heroines such as Anne, Emily, and the Story Girl (Sarah), her life was unfortunately a lot more gloomy and depressing. It is pretty amazing that in spite of (or possible because of?) a hard life —a strict upbringing by grandparents who never showed affection, her mom died early on and her dad moved far away and married a woman who hated her, she had few close friends, had a difficult marriage and wayward son, and struggled with her publishers for many years for the rights to her books — she still wrote lighthearted, endearing, and entertaining stories of childhood and adolescence (many of which had tidbits of reality such as being an orphaned, desiring to be a writer, and having a propensity to re-name local places with much more romantic monikers). But most disheartening is that she battled mental illness in a time when treatment was not understood and being depressed was considered shameful and to be hidden. She seemed to often suffer alone during her dark moments, which just breaks my heart.

One of Montgomery’s lesser known stories (though one of her favorites), The Story Girl is written from the perspective of a young boy (which was the first boy-led novel I’ve read by her) who tells of the imaginative tales woven by the older and more creative teenager, Sarah Stanley, known to everyone as The Story Girl. I didn’t connect with this one, maybe because it seemed the plot was secondary to the continuous interruptions with random stories told by the Story Girl. She wasn’t very likable to me, seeming to be attention-hungry and obsessed with speaking her mind (though it often got the kids around her in various scrapes and blunders).


Finding Calcutta: What Mother Teresa Taught Me about Meaningful Work and Service by Mary Poplin (e-book)★★★★☆

An intriguing memoir by a woman who spent several months volunteering alongside the ministry led by Mother Teresa, Missionaries of Charity. She shares many of the conversations with Mother Teresa and other sisters who loved the most destitute and forsaken people of the slums of Calcutta, India. Mother Teresa is known for doing “small things with a great love”, living a humble life amidst those she served, denying herself from modern conveniences so she could live like the poor she ministered to. The author structures each chapter to focus on a different lesson she learned, which was both fascinating (to learn about Mother Teresa’s extravagant love) and challenging (because I saw my own love was often lacking in comparison). What I loved most was the emphasis Mother Teresa and other sisters made about the source of their love and compassion coming not from themselves but from Jesus. They continually pointed to His love being the driving force and sustaining power behind their work with the poorest of the poor. Mother Teresa was a remarkable woman who lived a life devoted to Jesus and people, beautifully displaying God’s commandments to love Him with all her heart, mind, body, and soul — and that love spilling out to those He called her to serve. 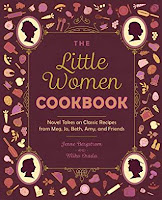 A delightful companion to the beloved classic, especially for an adventurous cook. Filled with recipes mentioned in the book as well as others that were popular during the Civil War era. But even more interesting were the culinary historical morsels of information (such as the different measurements they used: a “lump” and/or “butter the size of a walnut” = 2 tablespoon, “gill”=1/2 cup, teacup= 3/4 cup while a wineglass = 1/4 cup, tincup= 1 cup and a tumblerful= 2 cups) and the various cooking methods used back then. The passages from the book that matched each recipe were paired together to give more context. Understandably, the recipes were quite involved even though they were updated to modern measurements and equipment. I’m not the best cook so they seemed far above my expertise, nor am I patient enough for some of the recipes requiring weeks of waiting (such Amy’s infamous pickled limes) so I didn’t end up using any recipes for our most recent book club that I hosted where we discussed Little Women). But it was still a fun experience that enriched my most recent re-reading of Little Women.

Meg, Jo, Beth, and Amy March are sisters and best friends. Their different personalities and hilarious blunders are captured as they grow from young girls to young ladies. Along with the fun stories is also a great amount of wisdom peppered throughout the book from their mother, who they affectionately call Marmee. I first read this as a pre-teen (when o was single), then during Christmas 2016 (as a newlywed), and recently picked it back up again (as a new mom) when it was chosen for book club. It was been such a treat. I adored the humorous stories of their earlier years but this time around, loved Meg's newlywed and motherhood chapters because I felt like Alcott was very honest in some of the struggles of this season. Marmee's advice to her was so good, I found myself bookmarking several spots. This is a timeless classic in my eyes, evidenced by the myriad of film adaptations (one releasing in theaters next month!) and rightly so.


All But My Life: A Memoir by Gerda Weissmann Klein (audiobook)  ★★★★☆

A heart-wrenching memoir about the author’s six years of danger, loss, fear, and pure evil inflicted by the Nazi regime during WWII. Gerda doesn’t exaggerate with the title; she lost everything dear to her and was wasting away by the time she was liberated by American troops in 1945 from a concentration camp. This is a bleak and difficult book but important to read since it is a true account of a Holocaust survivor.

This book reminds me of: The Hiding Place by Corrie ten Boom (which is one of my favorite books ever).


The Man Who Never Stopped Sleeping by Aharon Appelfeld (audiobook) ★★★★☆

I have read many WWII novels but this was entirely different for a few reasons. It is actually not technically set in WWII but in the months and years after the main character, Jewish teenager Erwin/Aharon, is liberated in Czechoslovakia and makes the pilgrimage to Israel (what then was called Palestine). He has lost everything including his identity, which is the main theme of the book. Flashbacks to the pre-Holocaust years surrounded by loving family as well as devastating circumstances during the Holocaust appear in dreams, with his mother speaking wisdom to him along the journey. The odd thing about Erwin is that he spends the majority of the long trek to Palestine asleep. Various refugees he traveled with moved him from place to place as his brain shut down to recover after the traumatic years he’d barely survived. As he awakens to reality and his new life, he joins a band of young men to live in a kibbutz and fight an unnamed enemy, getting seriously injured soon after training. This causes a second sleep season because of the anesthesia required for various surgeries he undergoes. He processes his past and plans for his future as a prospective writer as he recovers not only his body but also his mind. Some of the book is intentionally hazy, lacking details I felt were crucial, which gave a slightly confused feeling you get when you are right between asleep and awake, wondering what is reality and what is imagined. His conversations with his deceased mother and other links to his past (he continually meets people who resemble family members) and the search for an identity (which includes a name change) add to the unique narrative that made this more of an intricately woven literary fiction rather than plot-driven novel.

A Christmas-themed short story by the bestselling Christian author about forgiveness and family. It’s got Hallmark written all over it, though it could have been more fleshed out to better understand the characters. I liked he Southern feel of the setting, a fictional Texan small town that reminded me of a nearby town in the Texas Hill Country called New Braunfels. This is interesting because Lucado lives in the same city I do so I wonder if that town inspired him. This is the first fictional work I’ve read by Lucado (although many of his nonfiction Christian living books include allegories that read like short stories) and I wasn’t impressed by it, but I think it’s mainly because I don’t particularly like short stories when I feel the characters haven’t had enough time to be developed (one of my top things I look for in novels I choose to read).

Witty and charming, this novella is an ode to the wonders of the reading life. After the Queen stumbles upon a mobile library, her literary journey begins, frustrating those around her who liked her before she became an avid reader. Her Majesty becomes more outspoken and bold as she discovers the works of both classic and contemporary writers and people don’t really know what to make of it. This is a quick, fun read with a bit of silliness to balance the thoughtful prose about discovering the joy of reading.PG: a few curse words and a crude sexual reference


The Count of Monte Cristo by Alexander Dumas (audiobook) ★★★★☆

A classic tome of epic proportions... on audiobook it was forty-two hours long!!! Dealing with themes of betrayal, vengeance, retribution, wealth, power, and playing God, it is the story of young sailer Edmund Dantès’ metamorphosis into the prestigious, mysterious, and revenge-seeking Count of Monte Cristo. How did he get from Point A to Point B? Imprisonment for fourteen miserable years after being falsely accused of a crime he didn’t commit and discovering a hidden treasure that makes him extremely wealthy.  Once he escapes the isolated Chateau d’If  off the coast of Marseilles (think Alcatraz), his whole life is aimed at making the three men who were behind his imprisonment pay in his incredibly elaborate quest for justice. There is a plethora of extra details and subplots that understandably didn’t make it into the motion picture adaptation, and at times it felt like there were useless, filler chapters. But the genius of Alexander Dumas (also known for The Three Musketeers) is evident as it eventually all comes together in what has to be the most painstakingly intricate plot. It would be a great book to discuss with others, particularly the topic of vengeance and playing God in attempt to right the wrong done against yourself or others.


What did you read during the month of November?