In Every Season: The Surveys 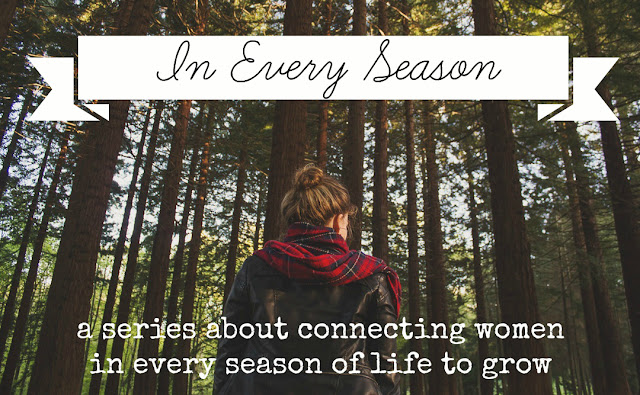 Hey y'all! I wanted to share a bit about the two surveys I sent out in preparation for this series, "In Every Season". If you missed yesterday's post about the series, that may be a good place to start for this post to have any context (read it HERE).  This may be a bit dry, but I thought it would be important to share some background about the surveys that would play a big part in the weeks ahead.

My goal for these surveys was to gather information about what women from the two target groups (Christian single and young married women) felt could improve community between them and women in different seasons. I wanted to learn about what women felt were struggles as well as joys in these seasons. My hope was that it would encourage other women to be more intentional in starting conversations and building friendships with women in different seasons as themselves.

Season of Singleness Survey
In the survey for single women, I sent the survey to fifty single friends and acquaintances  and 31 responded by completing the survey. Of these participants, the age group was represented as shown below:

These participants varied in occupations, schooling, and life experiences. It was an anonymous survey, so I do not know which thirty-one of the fifty women responded, but there was variety in the single Christian women that were contacted for the survey. They were from different states in the U.S. and different cultural background.

There were seven questions in long-answer format asking questions including:
Young Marrieds Survey
In the survey for young married Christian women, I received 51 responses from women who have been married 1 month - 10 years. Here is the breakdown:

The questions in the survey included:


The responses from both surveys were honest, raw, and some made me tear up. Thank you, thank you, thank you to all the women who participated in these surveys and shared a bit of their hearts with me! I am humbled by all of your responses and am excited to share some thoughts in the weeks and months ahead. I will use the surveys as a backbone for the structure of the In Every Season series. They will help direct the topics for the posts, such as an upcoming post on what NOT to say to single women,  written mainly with responses from the second question of the survey for singles.

I goal for the surveys was to gain a myriad of voices other than my own. I had my own experience as a single woman and now as a newlywed and often share these on the blog. But I wanted to also bring in more voices to explain their own experiences in different life seasons as well as an opportunity for them to share their wisdom.

Stay tuned for the next post for In Every Season series, The Hard Parts of Singleness.