Picture Books Based on Hymns 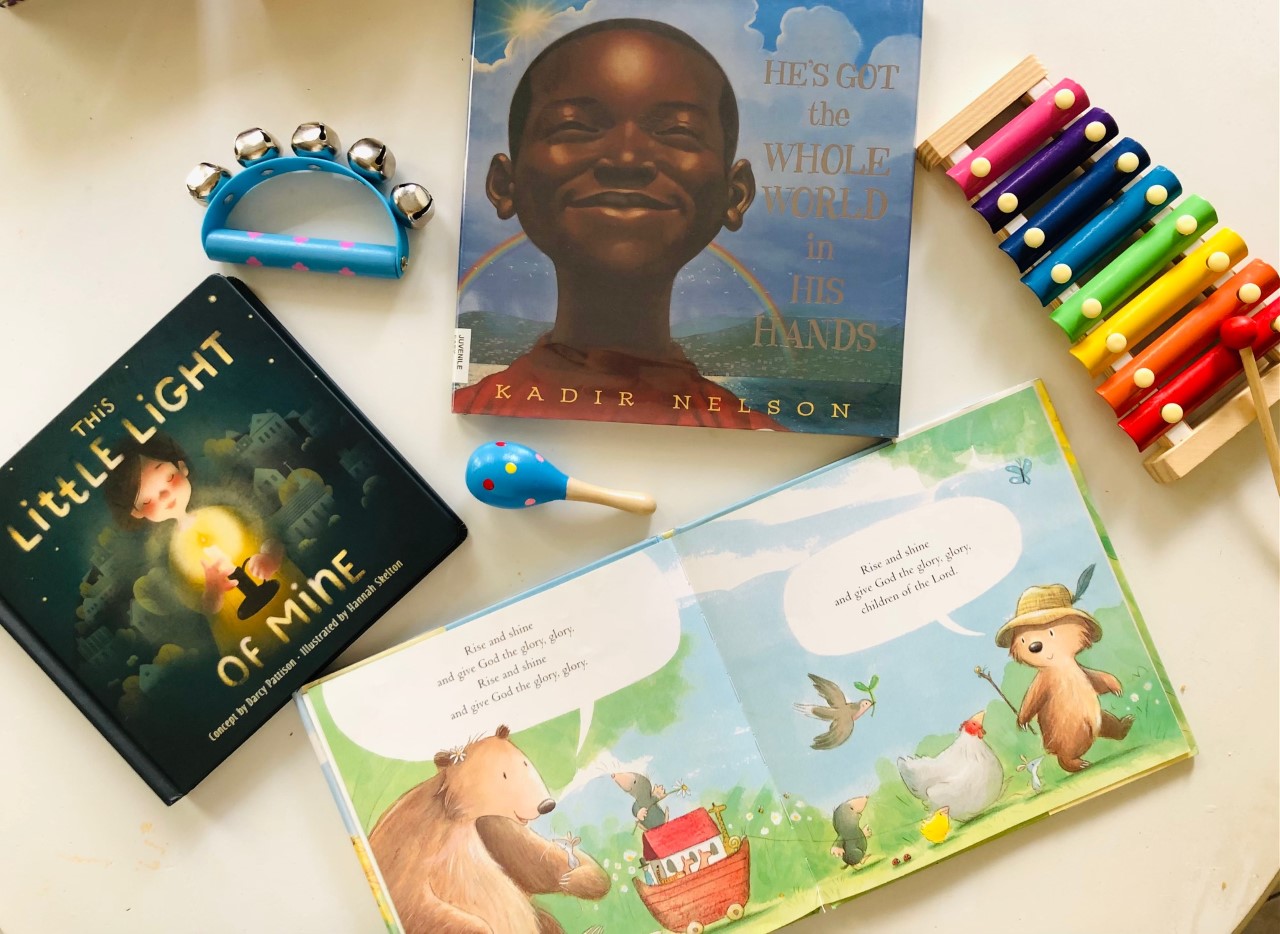 I love singing to Elliot throughout the day, but I don't have the best memory, so I often forget lyrics. One of my favorite picture book genres  is sing-along books, or books that have lyrics from well-known songs, both Christian and secular.  Elliot absolutely loves these books, so I have searched our library for different picture books specifically about Christian hymns to help expose him to the rich text of classic hymns while he is also exposed to the beautiful illustrations that help conceptualize the text. I sing-read these books during our morning nursing session after we read our storybook Bible and pray together. It's become a sweet tradition I look forward to continuing even when he's no longer nursing in the mornings. My hope is that he'll start singing along with me one day. Some of these hymns are centuries old, so it is a pretty amazing thing that they've been preserved and enjoyed for so long. I want Elliot to be exposed to Christian history, and music and art is one easy way to start in the early years. Some of these books have the music sheets at the back of the book, so if you are musically inclined, you can play an instrument as you sing the song! I plan on trying this with my violin in the near future. Or, what I want to do more often, is hand Elliot a few of his toy instruments to sing along and make his own joyful noise as I sing through the book.

There is research on how combining reading and music together  is an exceptional way to boost vocabulary, teach rhythm and rhyming, accentuate different parts of a word or phrase that may be missed in a regular reading voice, and is just so fun for both the reader and child to add some variety to read-alouds. Here are my current favorites. I was surprised that my library (and inter-library system connected with my public library) had so many of these.  It may help to make a playlist on Youtube, Amazon Music, or whatever music platform you use to save the songs of the picture books you choose to introduce to your child. It's fun when Elliot hears a song he recognizes form our picture books and will likely help him retain the lyrics better as well. 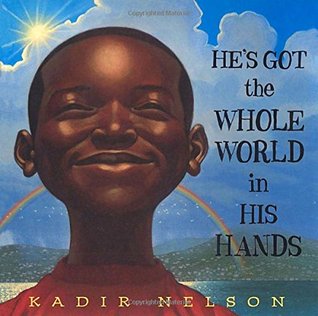 He's Got the Whole World in His Hands (illustrated by Kadir Nelson)
This is likely our favorite. The illustrations are absolutely breathtaking and realistic, portrayed from the perspective of an African-American boy as he goes about his day with his family. I had been familiar with the first few verses, but not all of them, so this was a treat for me to learn more of the song.
This hymn was passed down by African American slaves through the oral tradition, with countless new verses and variations. It is anonymous and could have been written by one person or a collection of slaves. It was first introduced in a hymnal in 1927, so it is nearly one hundred years old in written form, but  much older in the oral format. Scripture references include Psalmists 94, 93-99, which focus on God's cosmic rule and kingship over His creation. (source) 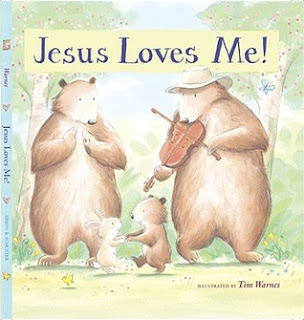 Jesus Loves Me! (illustrated by Tim Warnes)
Elliot adores this book! The lyrics to the well-known children’s hymn are paired with adorable illustrations of a bear family going fishing.
Written in 1859 by Anna Bartlett Warner, who wrote many hymns in her lifetime. It first appeared in a novel she co-wrote with her sister in a part where a dying boy is comforted by his teacher with the song.
Biblical references include  Ephesians 5:2, Jeremiah 31:3 (stanza 1), Galatians 2:20 (stanza 2), Matt. 18:2-4; 19:13-15 (stanza 3) (source) 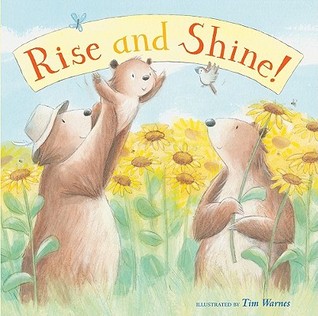 Rise and Shine! (illustrated by Tim Warnes)
Elliot thinks this is such a fun song! It has silly lyrics and made-up words for rhyming purposes (kangaroosies, floody, daysies, landy, etc), so it's very much a children's song, and it will get stuck in your head, fair warning! It tells the story of Noah's Ark, with the adorable bear family from Jesus Loves Me, gardening while the little bear plays with his toy ark. It's uncertain when this song was composed. It' mostly known children's camp song, but it may be a children's adaptation of a much older spiritual hymn. 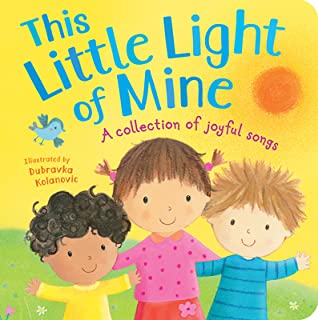 This Little Light of Mine: A Collecting of Joyful Songs (illustrated by Dubravka Kolvanovic)
This is a collection of classic children’s Christian songs. Each two-page spread focused on a different song, but some of them only had the first few verses of a song. The book includes “This Little Light of Mine”, “Jesus Loves Me”, “The Wise Man Built His ouse on the Rock”, among others! The illustrations are pretty simple (nothing special), but this is a good choice for minimalists who want a treasure of songs in one book. 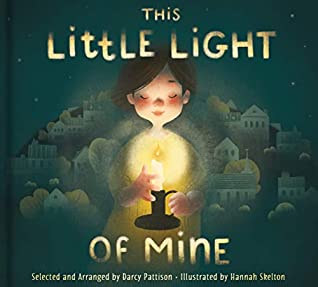 This Little Light of Mine  (arranged by Darcy Pattison, illustrated by Hannah Skelton)
The lyrics of the classic children’s Christian song are illustrated with sweet children carrying lanterns during the night throughout their neighborhood. It’s a visually beautiful book, interactive with the flaps to lift, which Elliot loves.
It's unclear who exactly first wrote this song. Most commonly, Harry Dixon Loes is attributed as the composer in the 1920s, but it is possible he only composed an adaptation for children of the original hymn. It was also adapted and connected with the Civil Rights movement as a freedom song in the 1950s and 1960s, along with the well-known Go Tell It On the Mountain, among others.  Scriptural reference includes  Matthew 5:14-16. 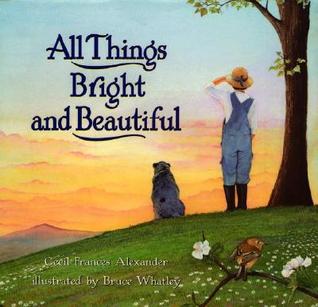 All Things Bright and Beautiful (hymn by Cecil Frances Alexander, illustrated by Bruce Whatley)
The lyrics from Cecil Frances Alexander’s hymn, accompanied by exquisite watercolor illustrations of a girl on a farm. Cecil was married to the chief bishop of Ireland. She wrote many hymns and this one was included in a collection of children's hymns in 1848. Scriptural references include: Matt. 6:28-29, Gen 1:31, Eccles. 3:11, Neh. 9:6, Ps. 148. 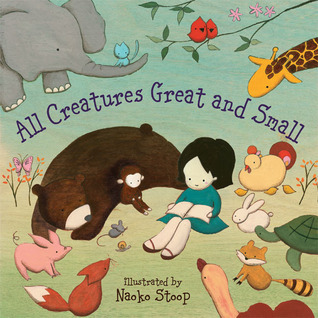 All Creatures Great and Small (hymn by Cecil Frances Alexander, illustrated by Naoko Stoop)
A different illustrated version of the same hymn as above. This may be more visually appealing for toddlers with the cute woodland creatures. Elliot and I love both books. 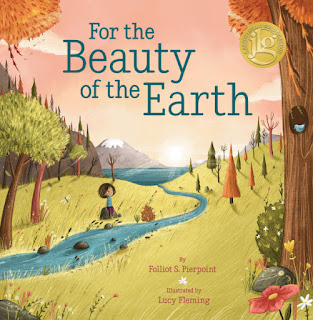 For the Beauty of the Earth (hymn by Folliot S. Pierpont; illustrated by Lucy Fleming)
Composed in 1864 while admiring Pierpont's native Bath, England countryside, for the purpose of communion in the High Anglican Church. This classic hymn was a little difficult at times for my toddler to understand due to the older language, but the beautiful illustrations and my own explanations and simplification of the text helped a lot. The rich lyrics are beautiful and worth introducing to children. 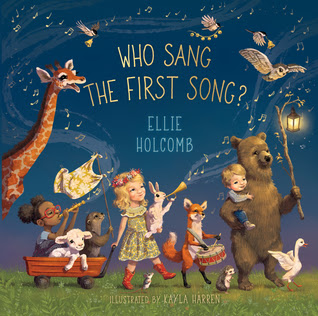 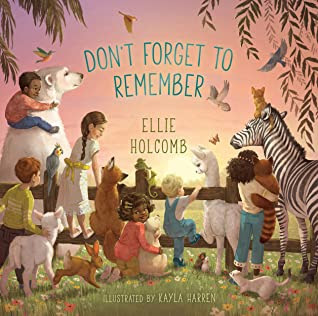 Don't Forget to Remember and Who Sang the First Song?  (both written by Ellie Holcomb, illustrated by Kayla Harren)
These last two are not technically hymns, but they are Christian songs for kids and just too good to leave  off this list.  The text in both books is lyrical and powerful reminders of God's love and Him as Creator, while the creative and stunning illustrations are some of my favorite EVER. Elliot loves them both. Ellie Holcomb also has children’s albums with music that corresponds to the books, which is so fun to listen to in the morning with him. For a taste of the music and lyrics of the book, check out Sing (Who Sang the First Song is based on this song, or the other way around?), Don't Forget to Remember. Ellie reads Don't Forget to Remember in THIS video and Who Sang the First Song? HERE!
Email Post