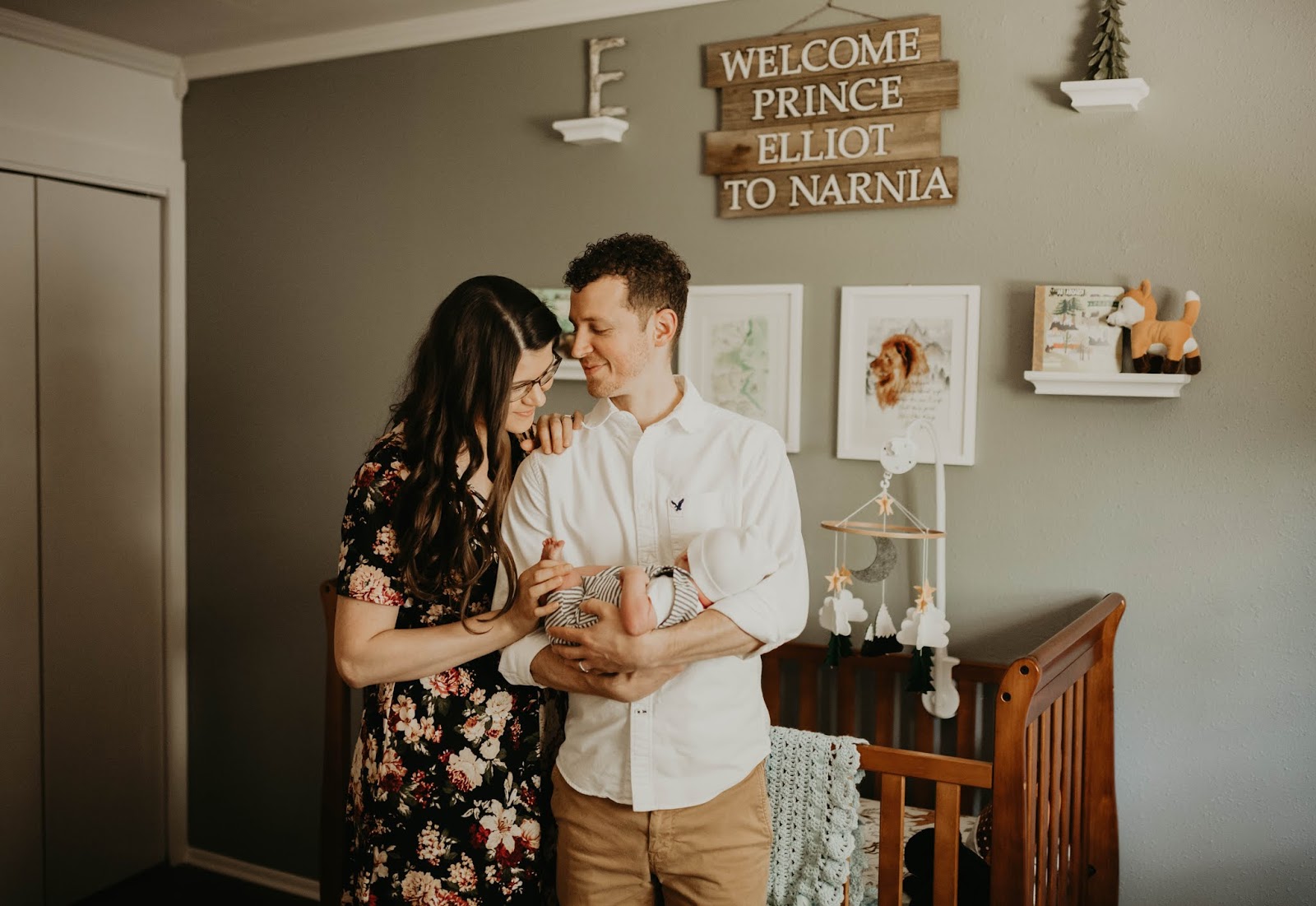 Elliot is seven months and I am just now getting around to sharing photos of his nursery. Oops! Better late than never, right? When I envisioned his room, I wanted it to be reminiscent of my Pacific NW roots (the woodland theme) as well as a bit of whimsical and imaginative (C.S. Lewis' Narnia series is beloved by both my husband and I), so I married the two themes together since. I absolutely love how it turned out. In the weeks before his birth, I would rock in rocker and imagine our little guy in my arms and it would bring so much joy.  Now that our little bundle of joy has grown to a chunky little monkey, it's even more special to be in his nursery. I use it only for sleeping and nursing, so it has a calm vibe to it, which is aided by the grey accent wall, I think. It was fun finding all the artwork and other decor to fit the theme. It was a lot easer finding woodland-themed items than Narnia, but I was so fortunate to have a dear friend make a few of the decor items for Elliot's shower (the Prince Elliot sign and the vintage Narnia banner) that were the perfect final touches to my Etsy and Amazon finds (which I tried to link at the bottom). A friend gifted me the stuffed animals since her son outgrew his woodland themed bedroom, so that was awesome!

The beautiful photos of the nursery were taken when Elliot was two weeks old by our wonderful photographer, Jeri Renee Photography . 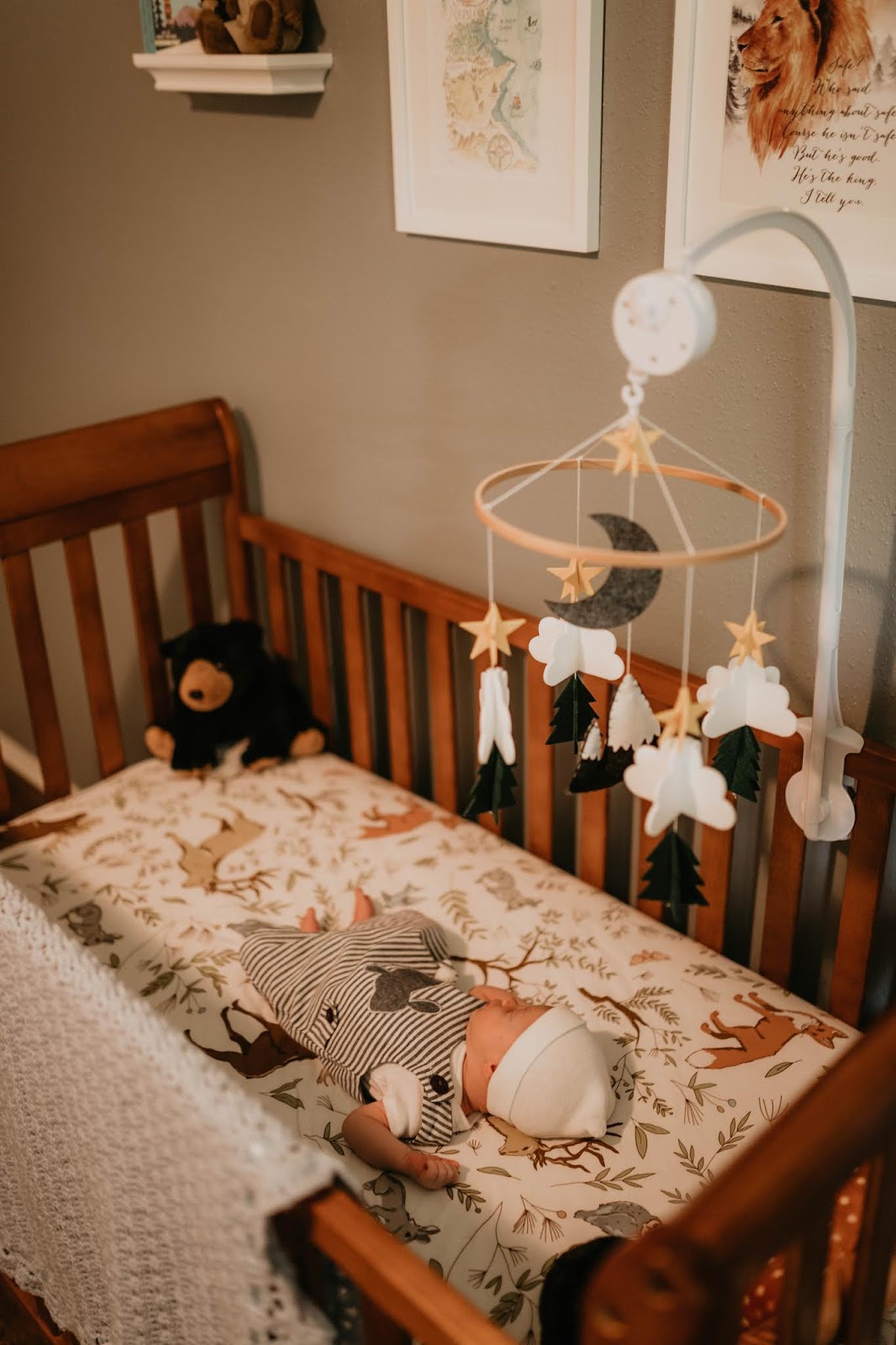 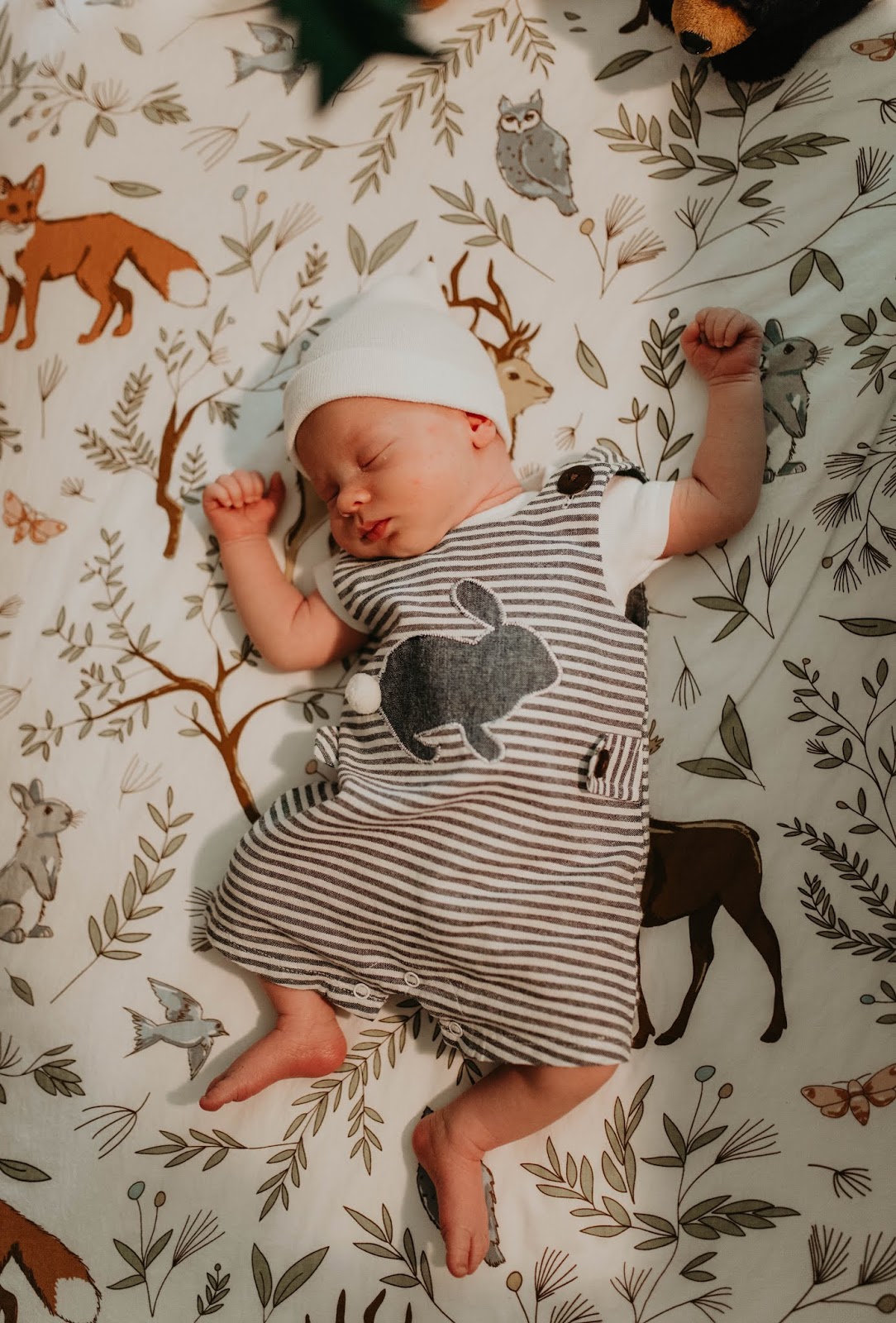 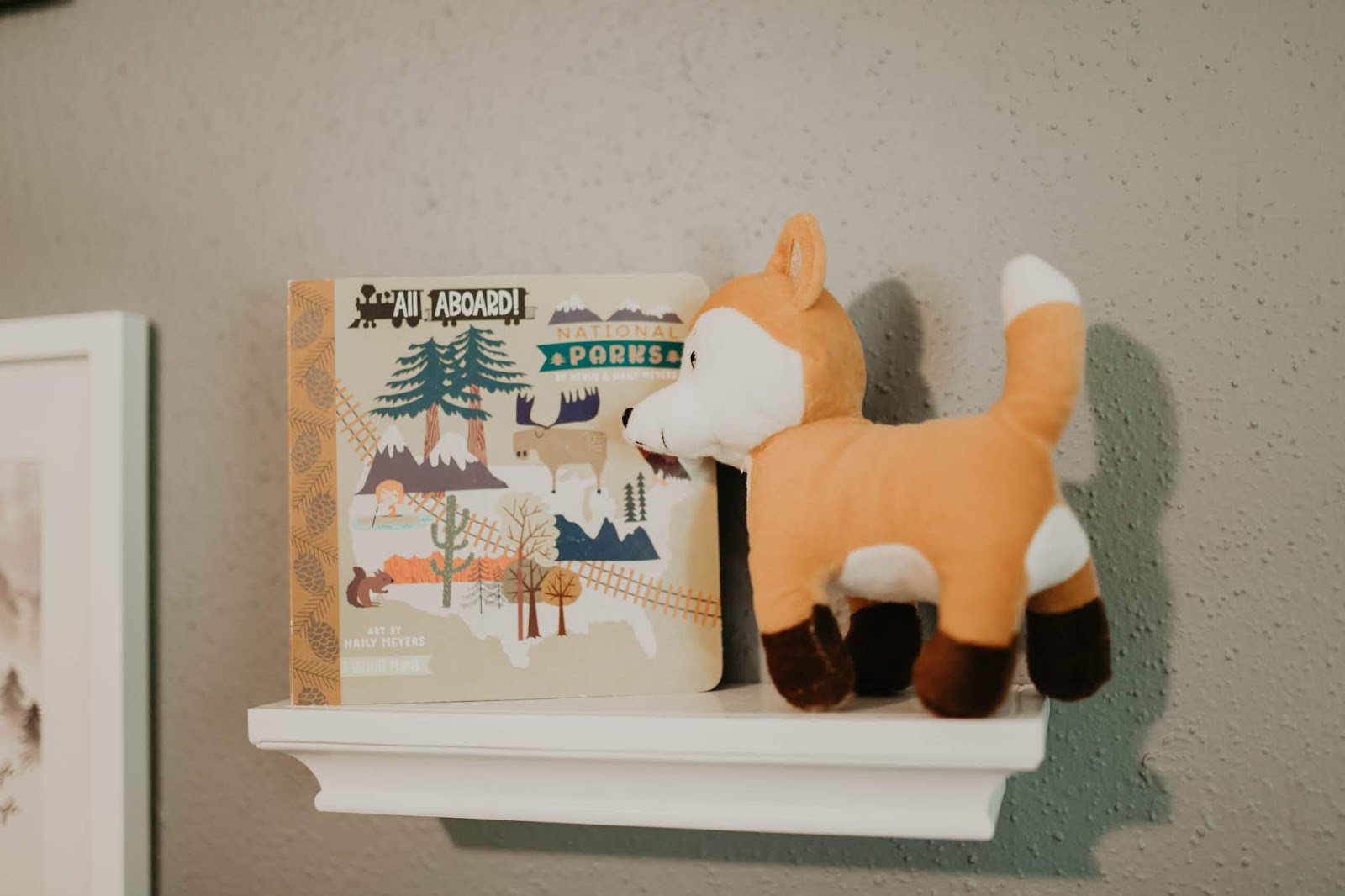 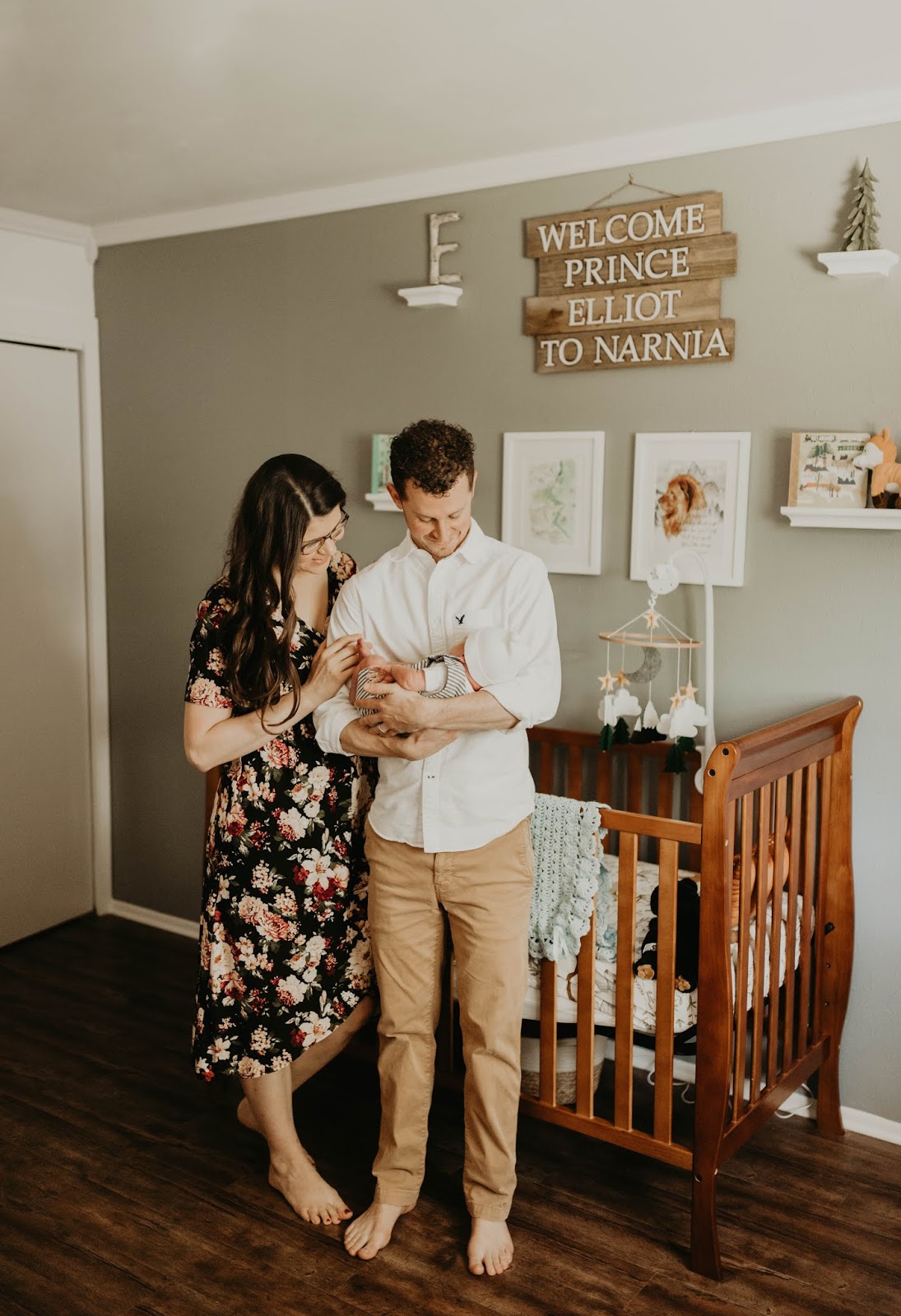 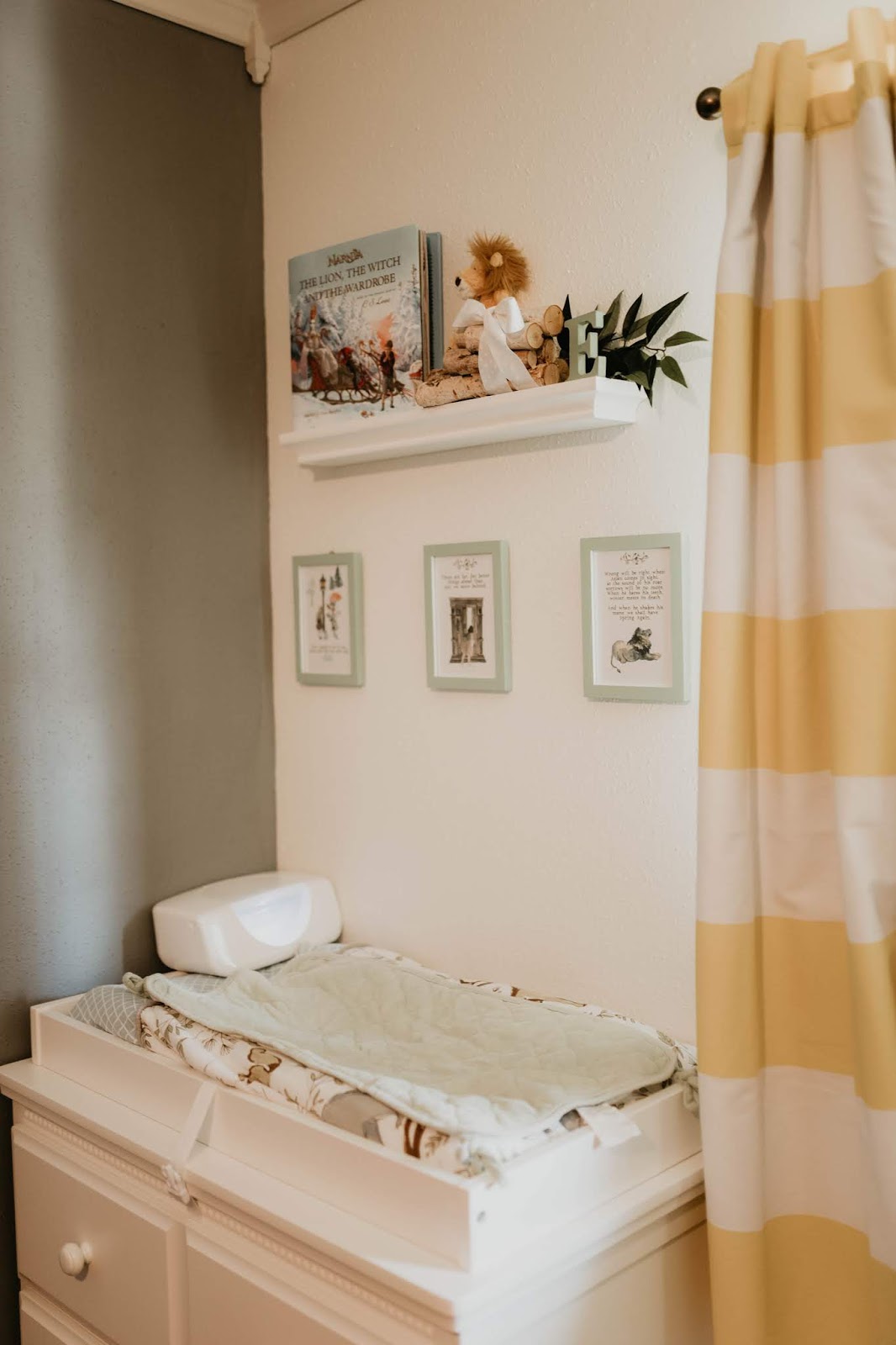 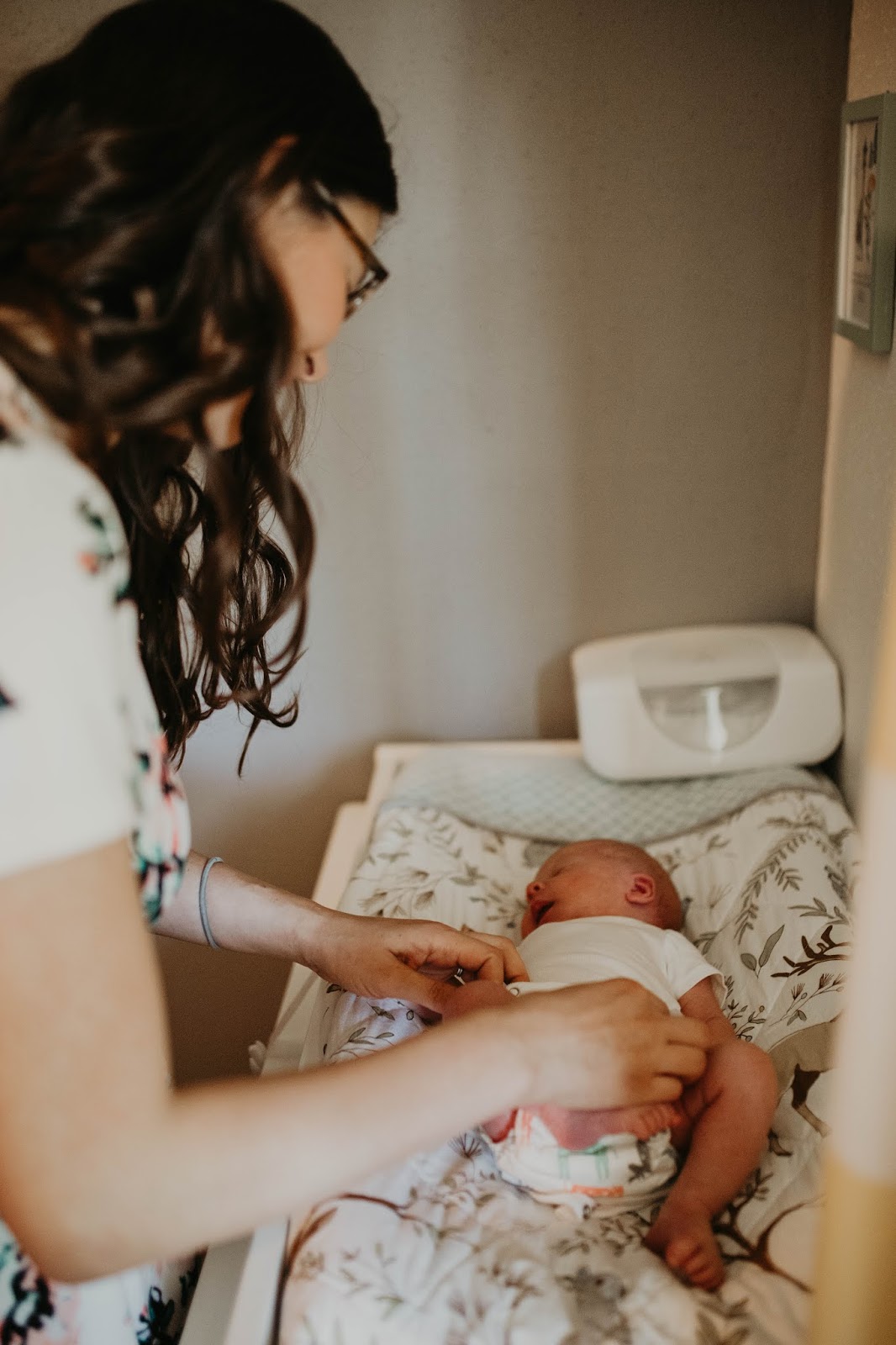 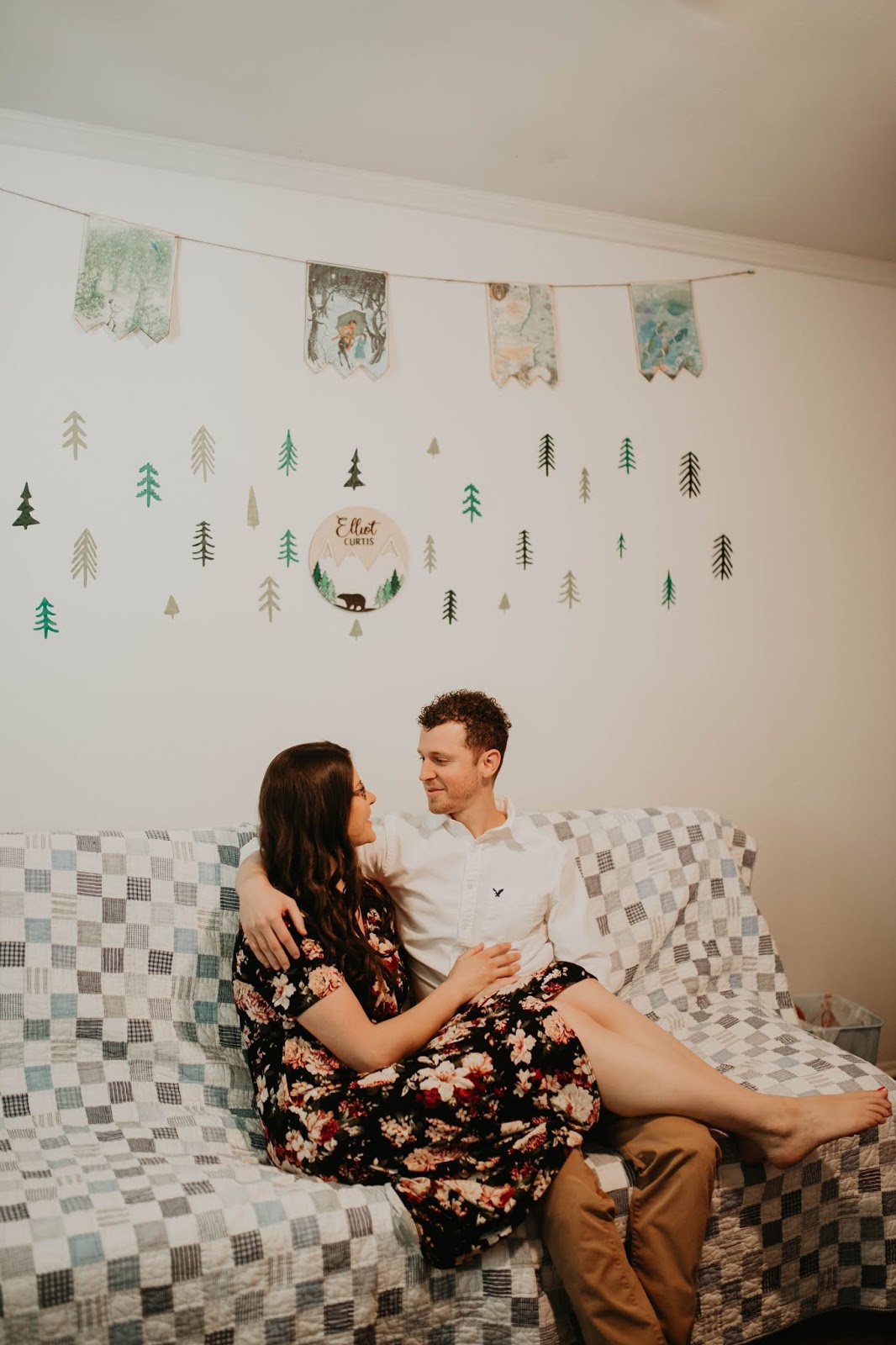 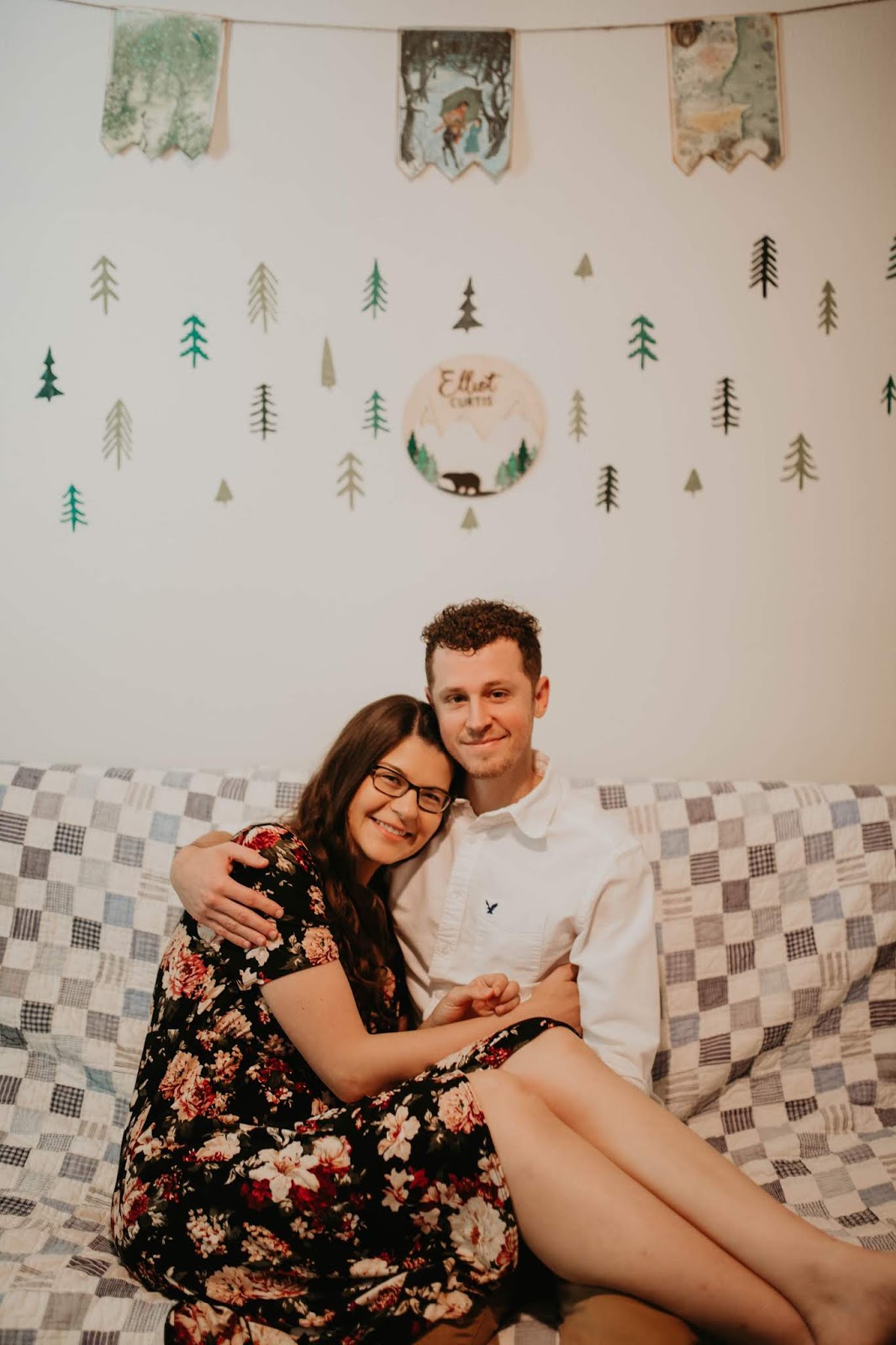 This futon came in use during the first few months when I was so tired, I slept in here after frequent nighttime nursing sessions rather than walking all the way back to our bedroom on the other side of the house. It will double as an extra sleeping space when we have multiple family members coming to visit (and Elliot would sleep in our room on those nights). The quilt is Greg's from when he was young. 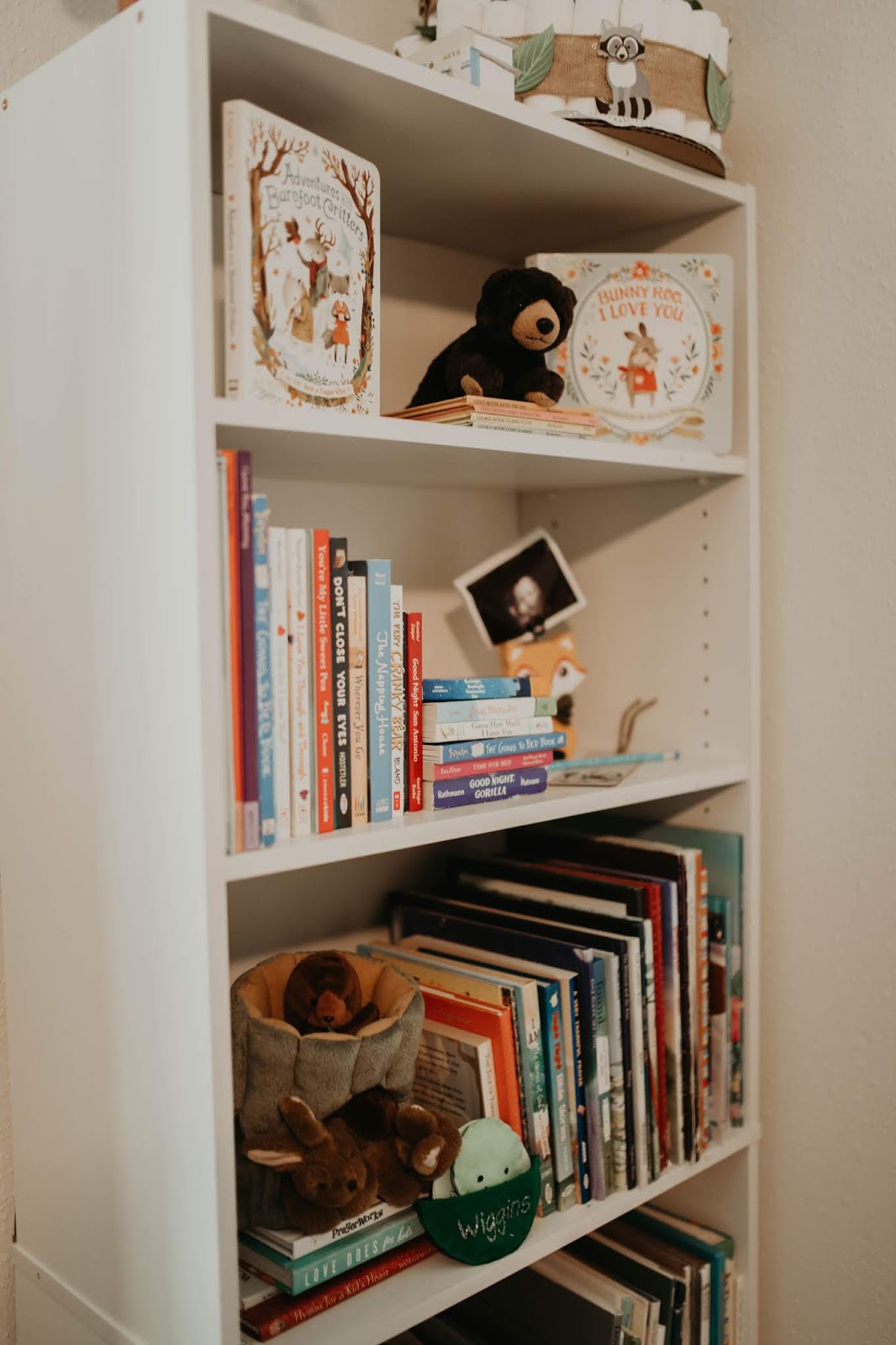 I have been collecting picture books for my future children since I was a teenager and with recently finding out about huge book sales in town where I grabbed books at a dollar each, I quickly accrued a rather large collection of children's books. Thankfully, I found an affordable large bookshelf at Walmart for his room as well as a smaller bookshelf with toy shelves in the living room (which holds the board books we are reading at this stage). 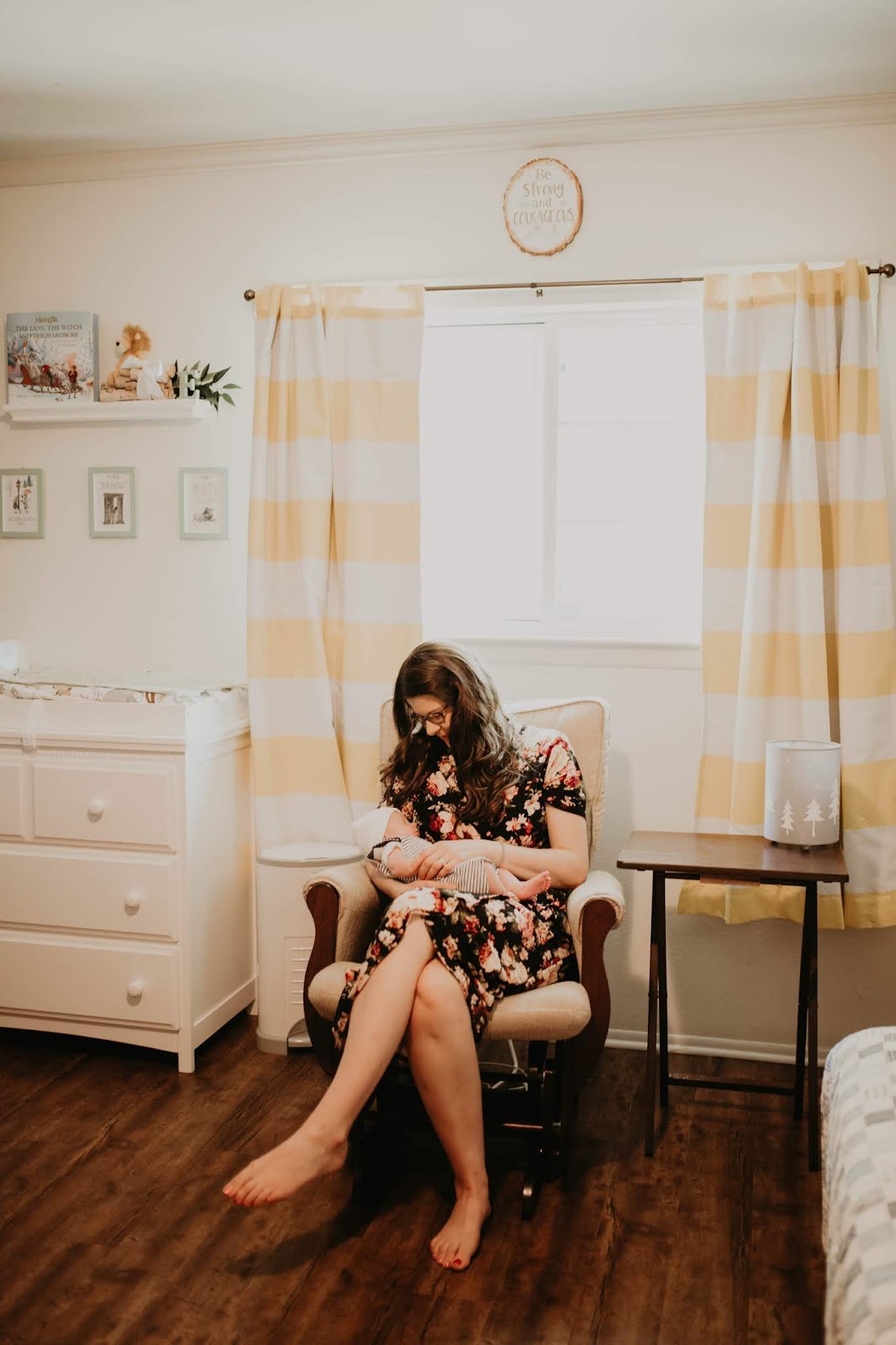