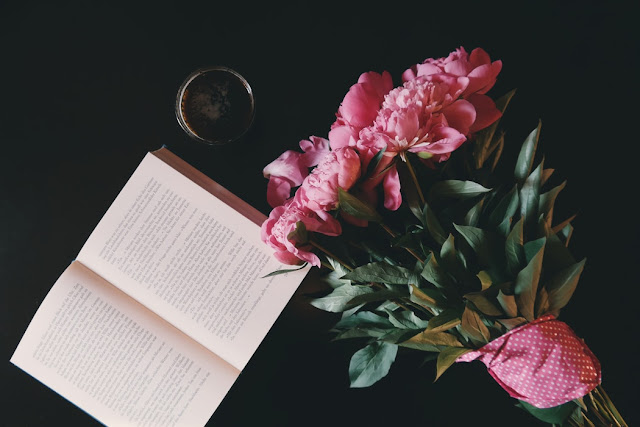 An intense, punch-to-the-gut mixed with a bit of suspense that is sure to conjure up all sorts of visceral feelings including disgust, anger, fear for the author's safety, and relief that it's all over (not a spoiler; she wrote the book, so that's a good sign she's in a safe place). Ok, let me back up and explain. This is Tara's memoir of growing up in a conservative Mormon family with parents who are survivalist (think "Y2K/the world is ending!/stockpiling on canned goods" mentality). Oh, and her dad is dead-set against the government (they're part of the Illuminati, don't cha know?) and forbids any traditional medical interventions (even after multiple family members have traumatic injuries) or public schooling. And also, she has a psycho brother. Sooo, why/how did I end up loving this disturbing story so much?  Tara did not receive any formal education until she taught herself enough through studying borrowed books to get her herself into college.  She doesn't shy away from the truth about her disturbing upbringing while also not dragging her family in the mud by bad-mouthing them. I appreciate that she also touched on the mental health issues that resulted from growing up with so much chaos and how she worked through it. She relied heavily on her own memories as well as the memories of other family members who were willing to help her relive her dysfunctional upbringing and explains how she ended up at Cambridge (woah!). This reads like fiction (and almost seems to crazy too be true).

Warning: Some disturbing, violent scenes and lots of language.

I recommend if: You liked The Glass Castle or any other story of dysfunctional families

I had never heard of this YA/middle grade novel until I saw it on the The Great American Read list. It's a fast-paced novel that ranges from heartfelt to hilarious, and does both flawlessly. Castle Cranshaw (aka Ghost) lives on the wrong side of the tracks with his mom after a violent altercation with his dad, who is now out of the picture (but not out of Ghost's thoughts and fears). A bit of a loner, he gets recruited onto a track team after the coach sees his outstanding potential. Ghost has a habit of running -- running from his past and from the fear and anger welled up inside of him. Through the help of the coach and teammates, he has a chance at greatness. I loved how goofy, quirky, and obsessed with Guenness world records Ghost was as well as the raw and realistic portrayal of what some would label a 'troubled youth'. With each page, Ghost had me cheering him on.

This mammoth of a book (clocking in at  17.5 hours or 558 pages) follows high-school sweethearts Ifemelu (a self-assured, bright, strong female who grew up in lower middle-class) and Obinze (quiet, pensive man who grew up affluent) in their formative years in Nigeria and then their prospective experiences as immigrants to America (her) and England (him) and then returnees years later to their beloved Nigeria.  What I liked: I have never read a book that is partially set in Nigeria and it was fascinating to read about what life is like over there and what political and economic pressures convinced Ifemelu to leave family, her love, and her country. As a former immigrant myself (from Romania in 1989), I also enjoy a good immigrant story, or better said, the experience of people from other countries as they acclimate and assimilate (or don't) to American life and culture, so the early years of Ifemelu in America were fascinating. The razor-sharp observations of Ifemelu on her blog, which is titled "Raceteenth or Curious Observations from a Non-American Black on the Subject of Blackness in America" was another bright spot in this novel and gave me a lot to think about. What I did not like: all the sex and profanity as well as Ifemelu's self-obsorbed and often greater-than-thou attitude. I wanted to better understand her but I ended up preferring her aunt, cousin, and Obinze, and Obinze's mom a lot more than Ifemelu. I also did not like the ending (I won't say why because #spoilers). This book started as four-stars and dropped down to two-stars by the last few hours of the audiobook, so I averaged it at three-stars. I chose this book because it was on The Great American Read, it has been hailed as a must-read by many bloggers I follow, and because I am intrigued in reading about people different than me. The good outweighed the bad, but just barely, and for that reaction on a book of this length, I am surprised I finished it.

I was in a school as well as church orchestra in my younger years and have since carried on an affinity for classical music (among other genres) so the idea of a novel following a competitive, string quartet from their beginning stages as angsty-but-talented college students onward towards adulthood appealed to me right away and proved to be absorbing to the very last page. The lives of Jana (the opinionated, bossy first violinist), Brit (the quiet second violinist in search of love), Henry (the viola prodigy), and Daniel (the cellist with slight anger and commitment problems) are inextricably connected as they aim to harmonize their music at the expense of dissonance in other areas of life, including marriages and family. I never thought about the commitment it takes to be part of a tight-knit musical group like a quartet where  a missed beat or sightly flat note could wreck a whole performance for everyone. Nor the intensely intimate recognition one has of fellow musicians when spending countless hours together practicing, recognizing quirks, secrets, and annoying habits of one another and sometimes even disagreeing with one another. Or the pressure to remain in the group despite what it means for your overall life.  I love reading about life experiences vastly different than my own, and this definitely fell into that category.  I knew absolutely nothing about this world before I started the novel. It made me want to pull out my violin to relive some simple Suzuki exercises because of the nostalgic and well-crafted descriptions of the beauty of music and string violins in particular. And Gabel formatted the novel uniquely, including classical musical pieces within the sections of the book and finished with a coda rather than an afterword, which made the music nerd in me smile. What kept this book from being pitch-perfect, however, was the unnecessary and unsavory sex scenes and profanity, which is why I docked in down two stars.

In this first book of The Incorrigible Children of Ashton Place series, fifteen-year old Penelope Lumley arrives to Ashton Place for her first position as a newly minted governess from the Swanburne Academy of Poor Bright Females. But her three students are no ordinary children. They bark, chase squirrels, and know nothing of the etiquette and education Penelope is expected to provide. Where did these wild but adorable children come from and can they quit their canine sensibilities long enough to impress at Lady Constance's much-awaited holiday ball? This was a hilarious, creative, witty middle-grade novel with excellent audiobook narration. It has Victorian feel to it,  with nods to the Brontë sisters (poor girl becomes governess), Jane Austen (fancy balls), and a smidgen of Sherlock Holmes (mysteries abound!). A very fun novel for middle-grader and adult readers alike!

Bread of Angels by Tessa Afshar ★★★☆☆

Tessa is the guest speaker at our church's women's retreat this fall, so the women's ministry is reading this book together and having book clubs in September to discuss. Tessa imagines the full story of Lydia, the "dealer of purple cloth" mentioned several times during Paul's missionary trip to the town of Philippi  in Acts 16. From betrayal and tragedy in her hometown of Thyatira to her prosperous career as a merchant of prestigious purple linen, Tessa's Lydia is often gripped by fear, shame, and guilt that makes her relatable to readers. Her struggle to trust people again after bitter betrayal was portrayed in a real and applicable way that will make for great discussion at book club. And I enjoyed reading how Tessa imagined Paul, Timothy, and Luke to be. It helped me remember that they were actual people with their own personalities, strengths, and weaknesses rather than mere characters in a story. It brought the Acts 16 verses to life in a creative way while still staying true to Scripture. I tend to shy away from Christian fiction that retells a Bible story by adding all sorts of new details and history. The skeptic in me wants to shout "how do you know she said/did that? It's not in the Bible!" rather than appreciating the creativity of the author's imagination. For this reason, the first three-quarters of the story dragged for me until Paul, Timothy, and Luke came into town.

I Am: The Names of God (for Little Ones) by Diane Stortz (illustrated by Diane Le Feyer) 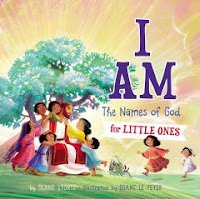 A beautifully written and illustrated children's book focusing on twelve names of God: Creator (Elohim), God All-Powerful (El Shaddai), I Am (Jehovah), God Who Saves (El Moshaah), The Lord Will Provide (Jehovah Jireh), The Lord Who Heals (Jehovah Rophe), Son of God, Teacher, Good Shepherd, Savior, Friend, and King of Kings. Each name of God corresponds with a short paragraph summary of a Bible story, a Bible verse mentioning that specific name of God, and one-sentence prayer thanking God for that specific attribute. I personally love studying the names and attributes of God because they help me stay grounded in who God says He is and His truth, especially in times when culture, social media, and my own anxiety and fears tend to sway me to think my problems or circumstances dictate what is true. I have experienced peace, joy, and a relief from anxiety in seasons when I am focusing on who God is, and what a better way to do that than study what His Word, the Bible, says about Him. So I believe this little book is filled with life-impacting truth that can help young children start to grasp the powerful yet loving God we have. And what a great opportunity for Christian parents to discuss both God's names as well as why they are important with little ones. Understanding these particular names of God will hopefully help children feel loved, protected, and secure as children of God.

Disclaimer: I received this book from BookLook Bloggers for free in exchange for an honest review, which I have provided here. 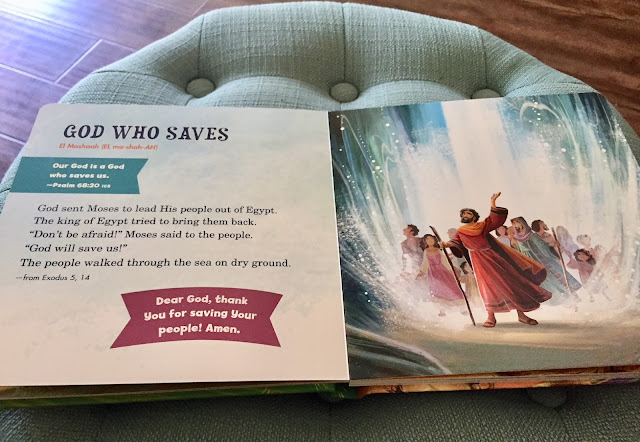 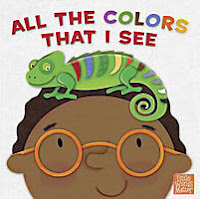 An adorable board book on colors that helps young children learn early on that all colorful things (including the red berries, green forests, blue sea, yellow ducklings, orange pumpkins, and puffy white snow) come from God. Each page has a darling two-sentence poem about a color and encourages young toddler hands to touch, tap, or pat colors, since little readers are usually squirmy and wanting to touch everything in sight.

"He has made everything beautiful in its time" (Ecclesiastes 3:11)

Disclaimer: I received this book from LifeWay for free in exchange for an honest review, which I have provided here. 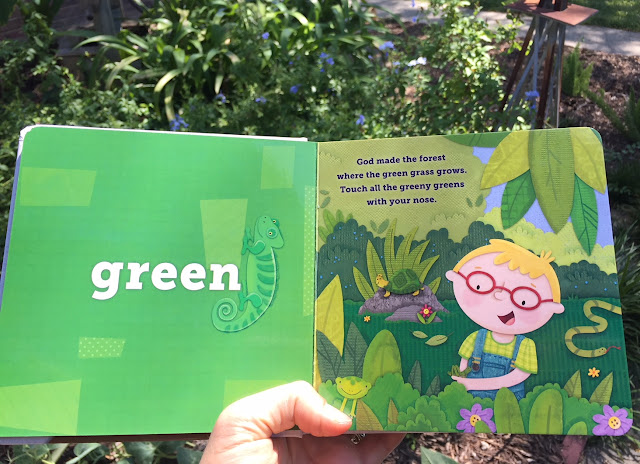