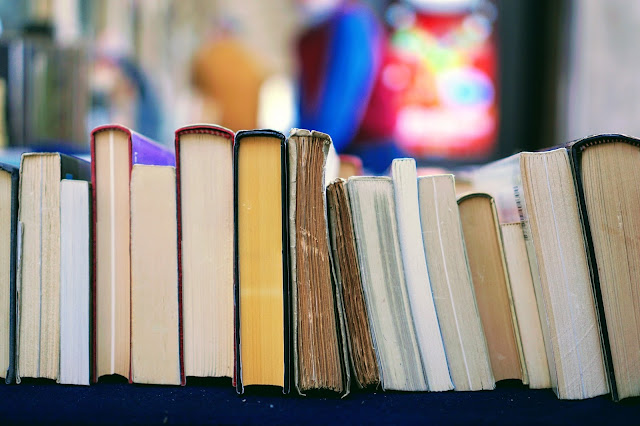 The Namesake by Jhumpa Lahiri (audiobook) ★★★★☆

This deeply moving, artfully written novel begins with a young newlywed Indian couple move from Calcutta to Cambridge Massachusetts during the 1970s. They soon have a son whom -- after much discussion -- they name Gogul after the husband's favorite Russian author. With a name as unusual as his, Gogul grows to resent his name as well as many of the Indian cultural traditions his parents still tightly hold onto. He struggles to find his own identity as he maneuvers his way through adolescence and adulthood. The clash of cultures, conflicts of assimilation, and the overall immigrant narrative are masterfully interwoven by Lahiri, who understood this firsthand. She writes from perspectives of the parents and Gogul fluidly, giving the reader an inside view to each of their longings, fears, and hopes. Last month, I read Lahiri's memoir on learning the Italian language, In Other Words. I was blown away by her skilled writing and knew I needed to read some fiction by her. I am definitely going to be reading more! (A little caveat: there are several sensual scenes; nothing too detailed but that is the reason I took off a star in my rating).


Make It Happen: Surrender Your Fear. Take the Leap. Live on Purpose by Lara Casey ★★★★☆

I have been following Lara Casey's goal-setting advice for four years now. She is a wise, motivated, inspiring woman with a message of hope and purpose. This is her first book (her newest, Cultivate, just came out in June!). Part memoir and part practical guide, she uncovers the perfectionist and obsessively productive habits of her young adulthood that threatened to steal her joy, peace, and health. Whatever career venture she jumped into, she jumped full force, working non-stop and leaving friends, family, and her relationship with God in the dust behind her. But with a crumbling second marriage and stressful lifestyle, she hit rock bottom and learned to let go. Her journey to finding purpose rather than perfection led her to grace-filled, prayer-saturated goal-setting coaching that she is now known for. Her book is honest and raw; she does not hide the poor decisions she made and the painful consequences that resulted. But she also does not shy from pointing the praise to God rather to herself for her success. In her book as well as on her blog and Instagram, I am continually encouraged by the ways she desires to grow in her reliance on God and to let Him lead her in cultivating the things that matter. The second half of the book is filled with practical steps to "make it happen" in a way that is not tedious, overwhelming, or obsessive, but rather helpful and insightful. This is a great resource for those people wanting to become more intentional with goals.

I never imagined I would read anything by the famed horror novelist seeing that I am a complete fraidy cat, but alas, after multiple bloggers mentioned it as the book on writing, I gave it a shot. From the looks of the book after I finished with its multiple post-it notes popping out the edges, it is obvious I loved it. King uses about two-thirds of the book as a memoir of his upbringing and how he developed a love and skill for writing. He uses the rest of the book not as a how-to guide, but rather as helpful advice for both fledgling and experienced writers. His wit, humor, and useful tips make it a great resource as well as encouragement for writers. Be advised, there are A LOT of cuss words and some questionable metaphors/anecdotes but the good stuff outweighed this, so I really enjoyed it!

"Writing isn't about making money, getting famous, getting dates, getting laid, or making friends. In the end, it's about enriching the lives of those who will read your work, and enriching your own life, as well...this book...is a permission slip: you can, you should, and if you're brave enough to start, you will. Writing is magic, as much the water of life as any other creative art. The water is free. So drink.
Drink and be filled up.”

“If you want to be a writer, you must do two things above all others: read a lot and write a lot. There's no way around these two things that I'm aware of, no shortcut . . . Can I be blunt on this subject? If you don't have time to read, you don't have the time (or the tools) to write. Simple as that.”

“Writing is a lonely job. Having someone who believes in you makes a lot if difference. They don't have to makes speeches. Just believing is usually enough.”

"Prayer is simply a heartfelt conversation between God and His child", writes Lucado.  It's not about having the perfect words or using proper language, nor focusing on a lecture about prayer.  Lucado offers a quotable, repeatable, portable prayer that encompasses the heart of biblical prayer and he breaks it down in each chapter of the book. This is simple prayer: Father, You are good. I need help. They need help. Thank You.  In Jesus' name, amen.  Lucado uses metaphors, adectodes, and Biblical stories to illuminate the power within these words. In the chapter titled Father, he looks at the profound truth that God is a perfect, loving Dad who wants to hear our prayers. In the chapter called You Are Good, he looks at, you guessed it, the goodness of God and why that is pivotal for us to trust if we are going to even want to approach Him in prayer (who would want to kneel down and pray to a God they think is not good, nor kind nor faithful?). He looks at intercessory prayer (They Need Help), repentance and petition (I Need Help), and thanksgiving (Thank You).

“If Jesus heals you instantly, praise him. If you are still waiting for healing, trust him. Your suffering is your sermon.”

“When we invite God into our world, he walks in. He brings a host of gifts: joy, patience, resilience. Anxieties come, but they don’t stick. Fears surface and then depart. Regrets land on the windshield, but then comes the wiper of prayer. The devil still hands me stones of guilt, but I turn and give them to Christ. I’m completing my sixth decade, yet I’m wired with energy. I am happier, healthier, and more hopeful than I have ever been. Struggles come, for sure. But so does God.”

Island of the Blue Dolphins by Scott O'Dell ★★★★★

A fictional tale woven from pieces of fact and folklore, O'Dell masterfully tells the story of Karana, the young girl deserted on an island for decades. When the males in her tribe are brutally attacked by lying seal hunters, the women are left to fend for themselves. Soon, a ship comes to taken them away to California. Karana is left behind while trying to find her little brother, and soon, it is just her on the island. As she lives year after year on the island, this wise, strong, resourceful girl learns to survive as she also discovers who she is. Written for young readers, the language is both easy-to-follow but also profound. This is an Indian girl living on a secluded island without any Western civilization influences, so O'Dell had to be creative in descriptions of seasons, animals, weather, and other other aspects of life. This made it authentic and obviously well-researched. You are cheering Karana every step of the way, understanding her struggles and triumphs a little more with each page due to the well-constructed plot, internal dialogue, and overall fluidity of the fact and fiction of the mysterious Lone Woman of San Nicolas Island.

The Business of Writing for Children: An Award-Winning Author's Tips on Writing Children's Books and Publishing Them by Aaron Shepard ★★★★☆

A  tiny (a mere 116 pages) but jam-packed, useful guide for new authors navigating the children's literature (affectionately called Kid Lit) world. His tips vary from the actual writing process, to finding an agent, to the publishing options (traditional vs self-publishing). He even provided examples of query letters, promoting your book, scheduling read aloud at schools, and looking at the rhythm of your story if you intend for it to be read aloud.  This is a writing book I definitely want on my shelf to use as a resource.

This is the compilation of the first two stories in what should have been a five-part novel series -- but the author never had a chance to finish it because fiction became reality when she was deported  to Auschwitz and died a month later. This masterpiece was found and published more than sixty years after she wrote them in the early 1940s. The first -- A Storm in June -- follows several families as they escape Paris on the eve of the Nazi invasion in June 1940. The second -- Dolce-- is set in a small provincial town during Nazi occupation. I have read other WWII novels that I have loved but this is set apart because it was actually written in France during the Nazi occupation from a eyewitness who herself would fall victim to the atrocities of Nazi Germany during WWII.

IT REMINDS ME OF: All the Light We Cannot See by Anthony Doerr

The Tipping Point: How Little Things Can Make A Big Difference by Malcom Gladwell ★★★★☆

A fascinating exploration of the various factors leading to that moment when "an idea, trend, or social behavior crosses a threshold, tips, and spreads like wildfire." He explains that there are three rules to a tipping point: The Law of the Few (Connectors, Mavens, and Salesmen are three subsets of people with social gifts that help propel towards a tipping point), The Stickiness Factor (how memorable / "sticky" is the idea, product, social behavior ... and what can be done to increase it), and The Power of Context (what environmental factors influence a tipping point). Gladwell uses a plethora of intriguing examples ranging from children's TV shoes like Blue's Clues and Sesame Street, vandalism and violence in the NYC subways in the 1990s, the beginning of the AIDS epidemic, the midnight ride of Paul Revere on the eve of the battles of Lexington and Concord, and how book clubs caused the little-known Divine Secrets of the Ya-Ya Sisterhood to become a bestseller.  If you are at all curious about what causes epidemics, bestsellers, new trends, and social change, this book will be fascinating!

IT REMINDS ME OF: The Power of Habit by Charles Duhigg

An African American labor and delivery nurse is reassigned to a different patient when a white supremacist couple demand she not touch their baby. But when the baby suffers cardiac arrest after a routine procedure, she is the only one in the nursery and her actions -- or rather, perceived inaction -- causes her to be accused of an unthinkable crime. Her life quickly falls apart and her fate is in the hands of a white lawyer who things she has all the answers.  Told from the perspective of the nurse (Ruth), her lawyer, and the white supremacist dad, this riveting novel tackles weighty topics of race, privilege, justice, compassion. It is an important book that was written with empathy, courage, and poignancy. Caution: LOTS of disturbing, offensive language and violent scenes, specifically from the white supremacist dad's chapters.

If you are interested in purchasing any of these books, please consider using the affiliate links below which would give me a tiny compensation at no extra cost to you