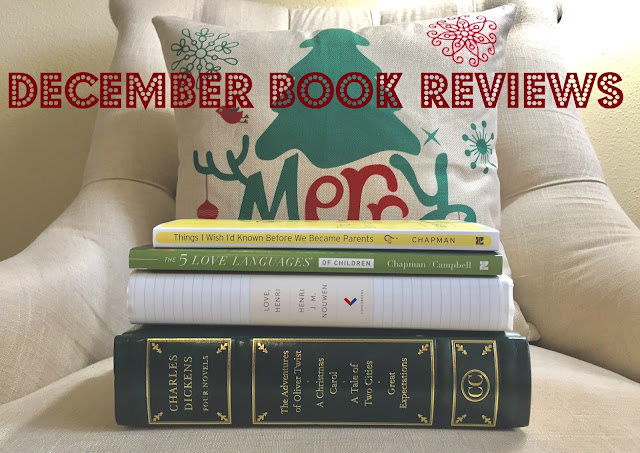 Let me start this review off with saying I am not pregnant. With a title like that, it could get people wondering ;) But I really liked Chapman's The Five Love Languages, so I ordered this one to review because we eventually want to become parents and learning a little bit beforehand is a good start. The chapters are broken up to share the twelve things  Chapman and Warden wish they knew before they each became parents. Chapman and his wife are an older couple at this point and Warden and her husband are a younger couple, so the two perspectives gave this book gave these two perspectives. Some of the things they mentioned felt like "well, duh!" at first, but once I got into that chapter, I was amazed at the wisdom they each shared.  A few examples of things they wish they knew: that children's emotional health is as important as physical health, that sometimes parents need to apologize, that social skills are as important as academic skills, and that children need bounderies. Each chapter ends  with a Talking It Over discussion section for parents to apply and practice what they read. I think this is a great tool for prospective parents as well as parents at any stage of life since we will never know it all and could use a little help along the way, especially when it comes to rearing a little human being. Loved it and will definitely read it again when the time comes for us to enter parenthood.

Disclaimer: I received this book for free from Moody Publishers in exchange for an honest review, which I have provided here.


The Five Love Languages of Children: The Secret of Loving Children Effectively by Gary Chapman and Ross Campbell ★★★★★

Greg and I loved Chapman's best-selling original, The Five Love Languages, so I was curious about how Chapman would approach parenting using the same model. He stressed throughout the book that each child is different, receiving and giving love in at least one of the five love languages: acts of service, words of affirmation, physical touch, gifts, and quality time. There are lots of suggestions for each of the love languages so parents can find ways to love their child in ways they feel they may receive best. He and Campbell also dive into lovingly disciplining a child, positive ways to redirect a child's behavior, and how to work through personal anger as a parent so it is not dumped on a child as well as helping children work through their own anger in healthy ways to avoid passive-aggressiveness. This is a practical, easy-to-understand resource for parents. I will definitely revisit it when we are parents.

Disclaimer: I received this book for free from Moody Publishers in exchange for an honest review, which I have provided here.

This book has long been lauded as a masterpiece and I would have to agree. Both heart-wrenching and inspiring, it sheds light on slavery in the South as it shifts perspectives between two women. Sarah Grimke is a quiet, tongue-tied girl who ends up receiving a slave named Handful as a gift for her eleventh birthday. She tries to refuse this "gift" because she feels slavery is wrong. Her and Handful develop a forbidden friendship and Sarah begins to develop stronger oppositions against slavery as she grows. The chapters alternate between Sarah and Handful, giving the reader an inside look to both of their worlds and how far they will each go to follow what they believe is right. They are courageous even through betrayal, ostracism, crushed hopes, and witnessing the many atrocities of slavery. I was very surprised to find at the end that this is loosely based on a real Sarah Grimke. The audiobook narrators are amazing and carry the story very well.


A Christmas Carol by Charles Dickens ★★★★★

A classic that has a myriad of film adaptations, A Christmas Carol is a novella that is deeply witty as well as thought-provoking. Most people know the premise, so I won't go into it. I will say, however, that Dickens' writing is superb. This is the first novel I have actually read by him, though I am familiar with many of his stories from film or TV adaptations. Reading Dickens' is a whole different adventure and it was a lot of fun. His word selection and sense of humor bring a lot of enjoyment to an otherwise depressing book about a grumpy, selfish man who is either dreaming, hallucinating, or truly being visited by three spirits who'll hopefully turn his frown upside down :)

Widely known for her best-seller, Room, Donoghue returns with this mystery of an Irish young girl who claims she has not eaten for four months. A nurse named Lib knows this is humanly impossible and she is hired to watch this child to find out if its a hoax. Touted as a psychological thriller, I didn't really get into it until the second half. I kept thinking, how in the world could this girl not have eaten in four months? And the answer had me shocked, to say the least. It felt like a very long book (even when I sped up the audiobook to 1.5x)  but in the end I understood why there were so many seemingly useless sections. Caution: It has a  "trigger" issue that I was really surprised and bothered by, but I think Donoghue handled it pretty well.

This posthumous collection of Nouwen's deeply personal letters to friends and admirers of his writing  allows readers to better understand Henri Nouwen almost as if reading a biography. He is known as a prolific author, spiritual director, theology instructor at various Ivy League universities, and priest to handicapped adults living in the L'Arch Daybreak community in Toronto. I read one of his most known works, The Return of the Prodigal Son this year and wanted to learn more about this gentle, deeply introspective, and thoughtful man.  He wrote thousands of letters throughout his life filled with encouragement and spiritual insight. Roughly one hundred of these letters are shared in this volume. I gleaned a lot of sound Biblical wisdom and insight even though I didn't always agree with his beliefs, which are deeply grounded in both Catholicism and Christian mysticism. A recurring theme was prayer in all circumstances and I really appreciated that he always pointed back to God's unfailing love and His desire for us to come to Him in prayer. I appreciated that each letter was prefaced with a paragraph explaining the context so that the reader would better understand what he is referring to in his letter. I felt like I better understood and more deeply respected him by the end of the book, though at times I skimmed some of the letters that didn't particularly interest me.

Disclaimer: I received this book from Blogging for Books in exchange for an honest review, which I have provided here.


Two From Galilee: The Story of Mary and Joseph by Marjorie Holmes ★★★★☆

The story of Jesus' birth is well-documented throughout the first four books of the Bible's New Testament, and yet, there are still a lot of mystery and unanswered questions that we may never know this side of heaven. What was Mary's parents' response to her being pregnant and declaring it was through the Holy Spirit? Did they believe her or did they think she was lying --- or deranged? In a culture where it was taboo for men to be in the birthing room, how did Joseph have any idea what to do to help his wife during the delivery? Holmes uses her creativity (as well as historical data about Jewish culture during that time) to imagine what life was like in the months prior to Jesus' birth. Her story makes Mary and Joseph real people with real worries, fears, and joys. Though some of it seems a bit far-fetched, when read as fiction rather than trying to argue the plausibility, it sparks the imagination to wonder what it was really like for this unassuming couple who would be the parents of Jesus. And it gave me a new wonder and joy around Christmas time in rejoicing that Jesus was born and not only that, but he grew up and paid the sacrifice for our sins through His own sinless self on the cross. Hallelujah!